A Tour of Our Tokyo Apartment

Finally! Here are the long awaited pics of where we stay in Japan! (If you can't follow my narrative or need more info, leave some comments on this post.)

This is our building from the road. (There’s another one to the right across from the parking lot which is part of the same complex.)

Just to the left there’s an area to park bicycles or motorcycles. The green net covers an area where the garbage is put out for collection. The Japanese (in this area anyway), do not use garbage bins or big containers. All garbage must be diligently sorted into 3 (basic) types: Burnable goods, glass and metal (tins etc).

Separate plastic bags should be used and separate collections days apply. Burnable goods are collected 3 times a week. There is also a special day once every 2 weeks when larger metal objects can be discarded of. Other large objects also have another special day. If your stuff is not sorted properly, it is not picked up.

Here they are very serious about their garbage. In our tenant information brochure it is made crystal clear that you WILL face eviction if in non-compliance with garbage sorting and collection. Hectic hey? And check the ever present vending machine. (There are 2 more just to the left out of picture.) Interestingly enough there are in Tokyo alone 6 million vending machines.

We’re on the first floor second apartment (#102). This is our front door. There is no keyhole and the key is a disk shaped like a “dogtag” with some odd holes punched in it. I'm not quite sure how it works. You just stick it into the slot and turn the handle. Rather interesting concept. At the front door there is also an intercom system with a camera. Just to add a little more value I suppose. There’s also a weird looking box at the bottom of the door. Apparently, when you’re expecting a delivery, you can set the combination lock and pass the code on to the delivery guy. They can then deliver anytime. Very cool. Too bad we'd never use it. It’s impossible to buy stuff in the shop when you’re standing right in front of it. Imagine phoning in an order!

What you see when you open the front door. 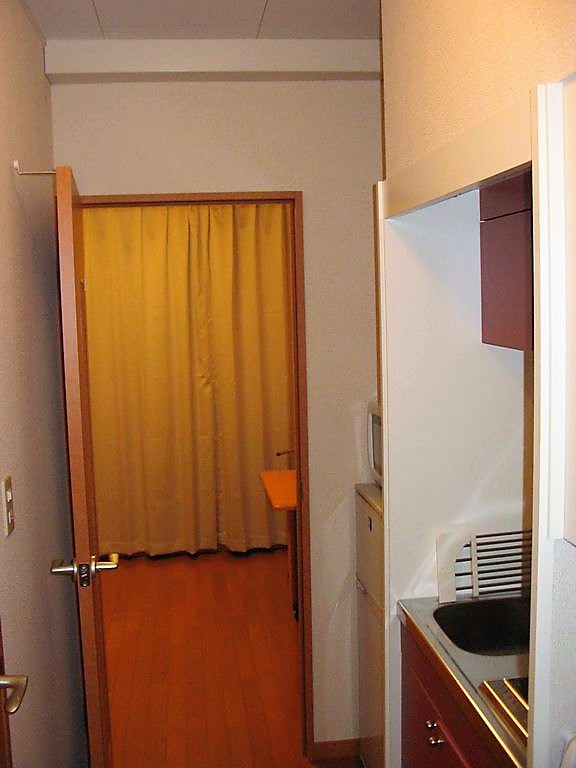 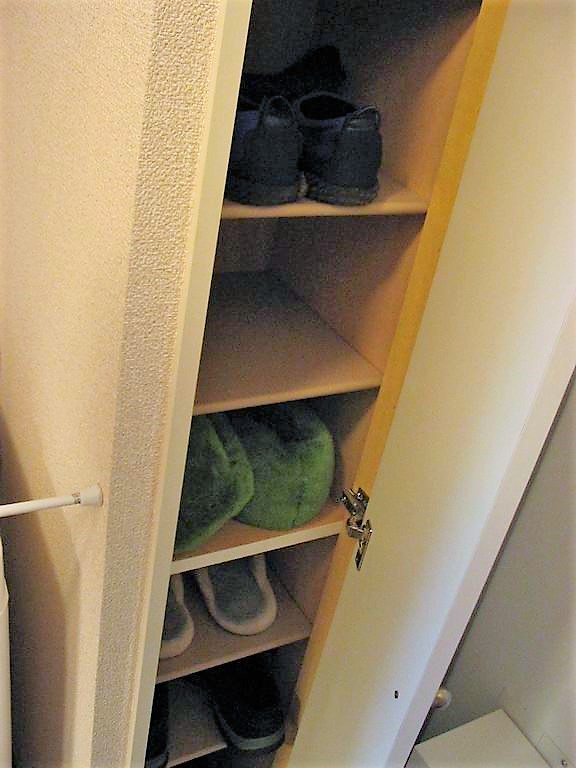 Immediately to your right is a shoe cupboard..

(Yip, you know what that’s for. NO shoes allowed inside!) You may only wear “house” shoes – we wear socks or slippers; with next to it a washing machine. (At this point I’ll mention that everything is either immediately left or immediately right, so I’m not going to use “immediately” anymore. Just assume it every time!). 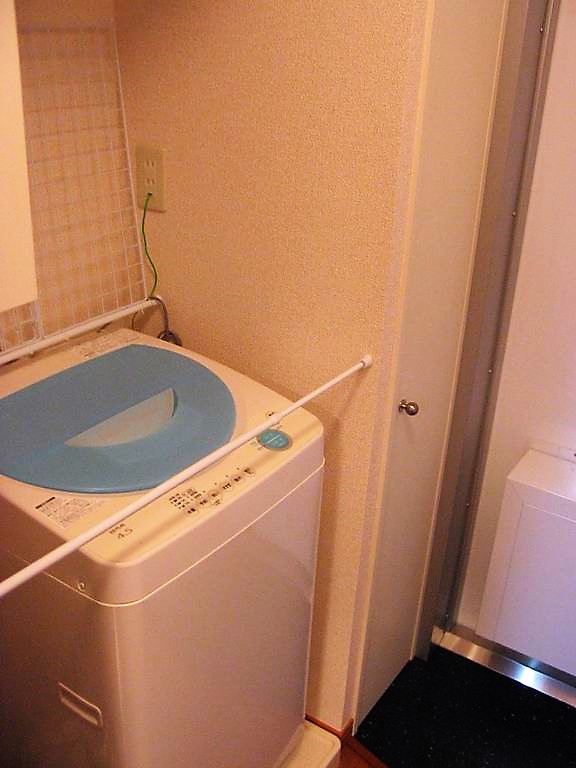 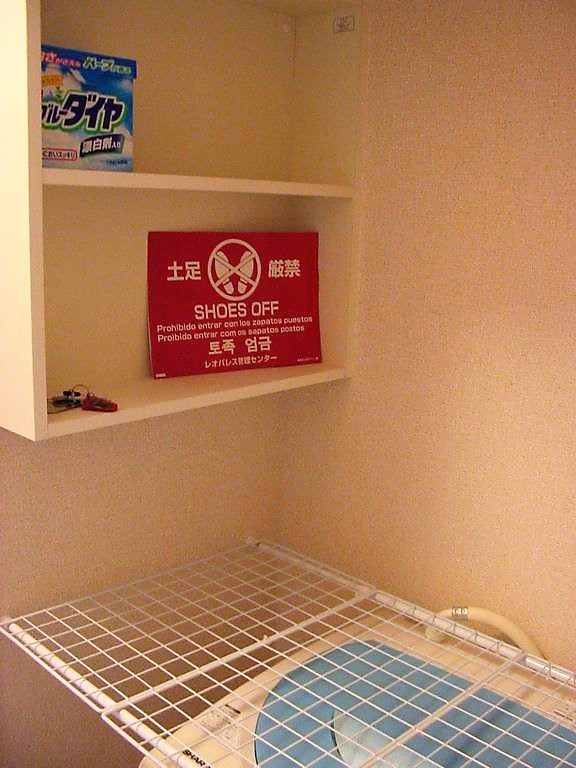 The “grid” over the washing machine is my attempt to create some space where the odd thing can be put down in the kitchen. I use the word “kitchen” very loosely here. We keep the little red sign up because we still sometimes forget the shoe thing.

It's getting a lot better though.

Behold! The smallest kitchen in the world! 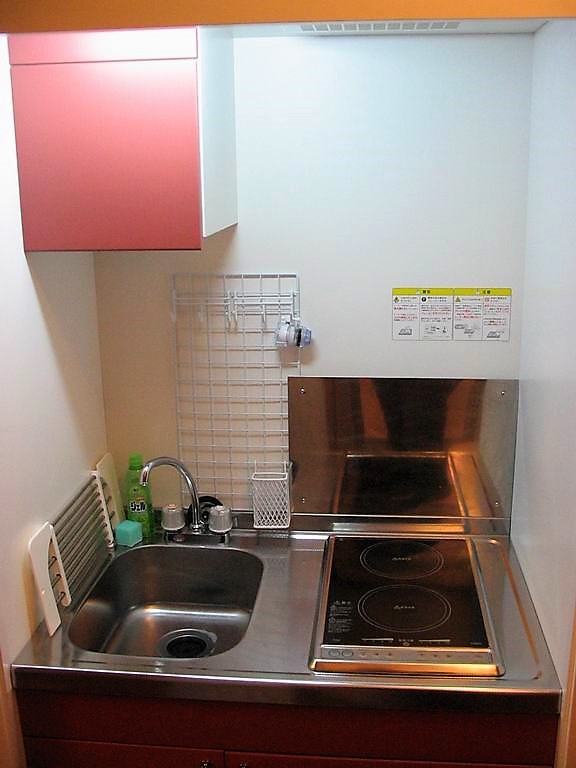 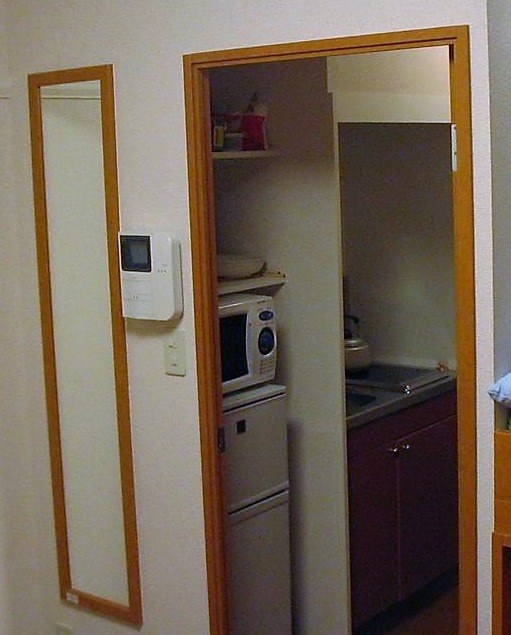 Very cool 2 plate glass top stove with electronic controls. The flaw here is that you cannot really fit 2 pots together on it. It’s just too small! Above the sink is the tiniest cupboard I have EVER seen. I kid you not. It houses 2 glasses and 3 mugs. It’s full.

Once again the grid at the back is our own addition. The thingy lying to the left of the sink fits over the sink (we discovered it in a shop here), to offer some extra space to work on. It’s a cool gadget which can expand as necessary to fit any size sink.

Needless to say in our case it just barely fits our basin on its smallest setting. There’s also a fridge and microwave with 2 open shelves. 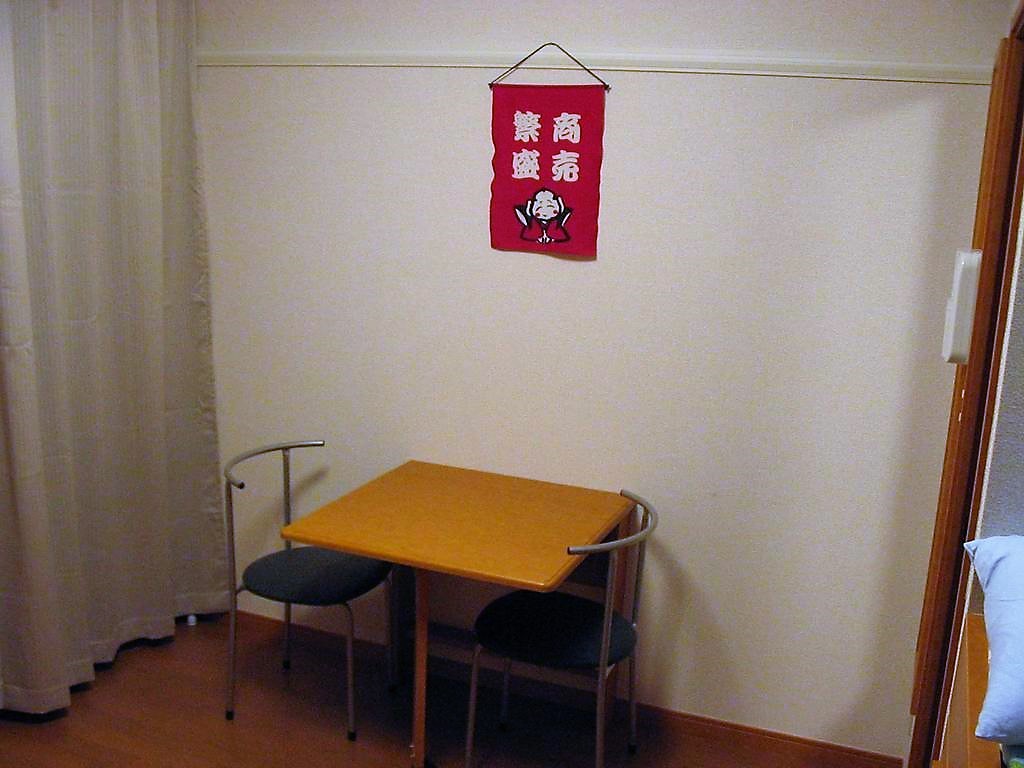 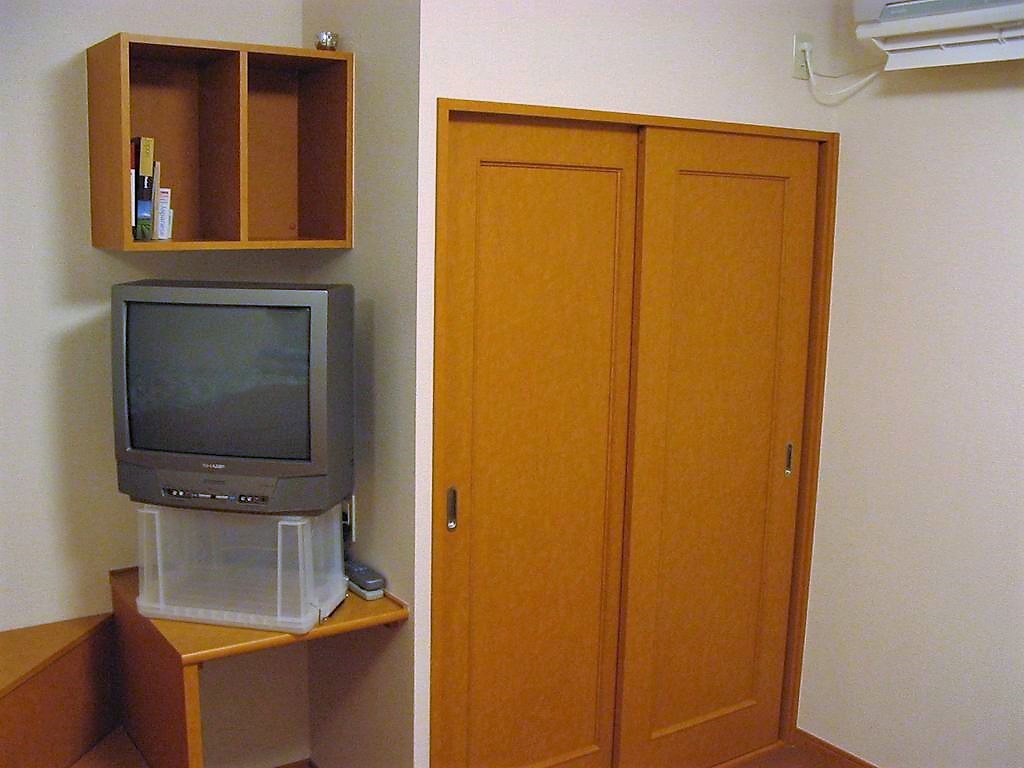 Across the “kitchen” (to the left as you enter the front door) is the entrance to the bathroom area which we’ll come back to later. Moving on into the “living area” there is a tiny collapsible table with two chairs on the right wall; on the left some cupboard space and a cabinet with a television. Yes, I know the TV looks weird. I propped it up on a crate because we have nowhere to sit down if we want to watch it. Except on the bed. Not that we watch much TV. It’s all Japanese channels anyway. We did however, bring some stuff from home to watch which is a real relief. Japanese TV is exhausting… For a expressionless, emotionless nation they appear VERY enthusiastic on TV. Hai! Hai! 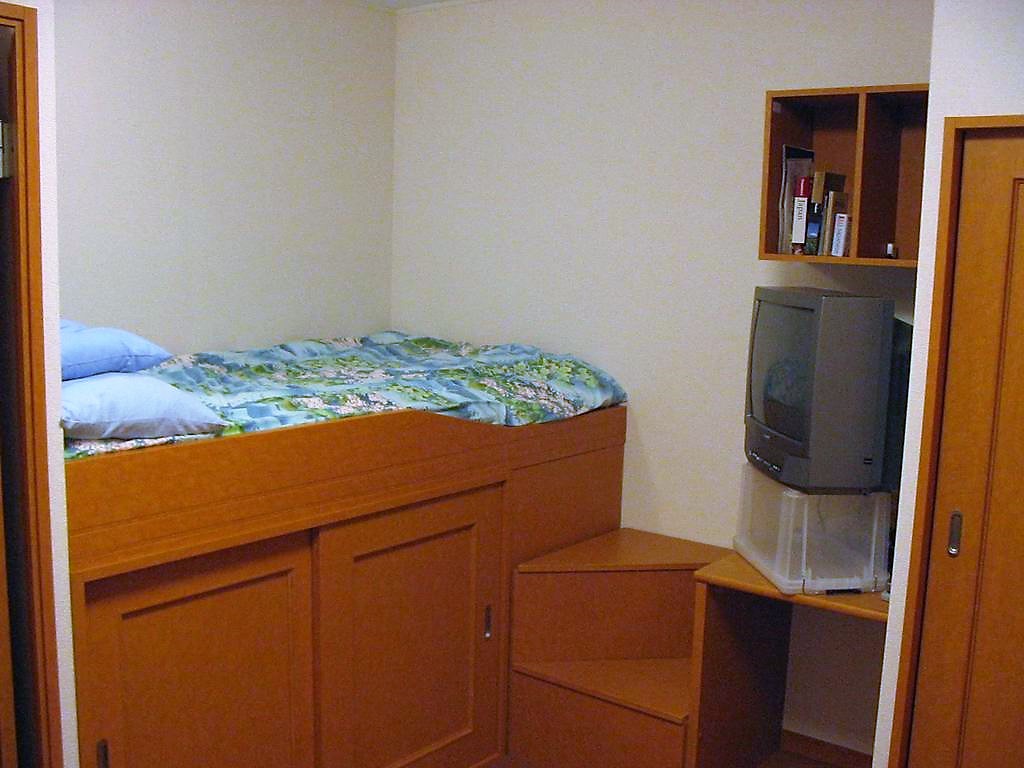 Swinging further to the left is the “bedroom” area with a gigantic storage cupboard underneath. Really a HUGE space compared to the rest of the place. We got all our luggage and other odd stuff in there. It’s also possible to put stuff under the steps.

The “bed” is not the biggest in the world and the apartment came with a futon and other bedding. I think they’re experimenting with new futon models because this one is about 2cm thick. It’s crazy how hard it is! After 2 nights of pain and suffering we went in search of a little foam mattress to add to it..

While on the bed subject. Annoyingly enough there were no pillows with the bedding provided except a tiny one stuffed like a Christmas turkey with some or other grain-like substance (I assume it to be buckwheat). So the search for REAL pillows ensued. Which is totally annoying because in Dubai we found vacuum packed feather pillows for super cheap! Actually contemplated whether we should bring some. I’m still apologising to Lisa because I was the one who said no. Oops.

BUT, we did manage to find some weird overstuffed pillow-like things. The even more interesting part is that it’s impossible to find white pillowcases. Apart from the fact that they're double the price of the actual pillow, they only come in ghastly colours and patterns.

Moving on, the next picture or two shows the view to the table from the bed as well as back towards the front door. 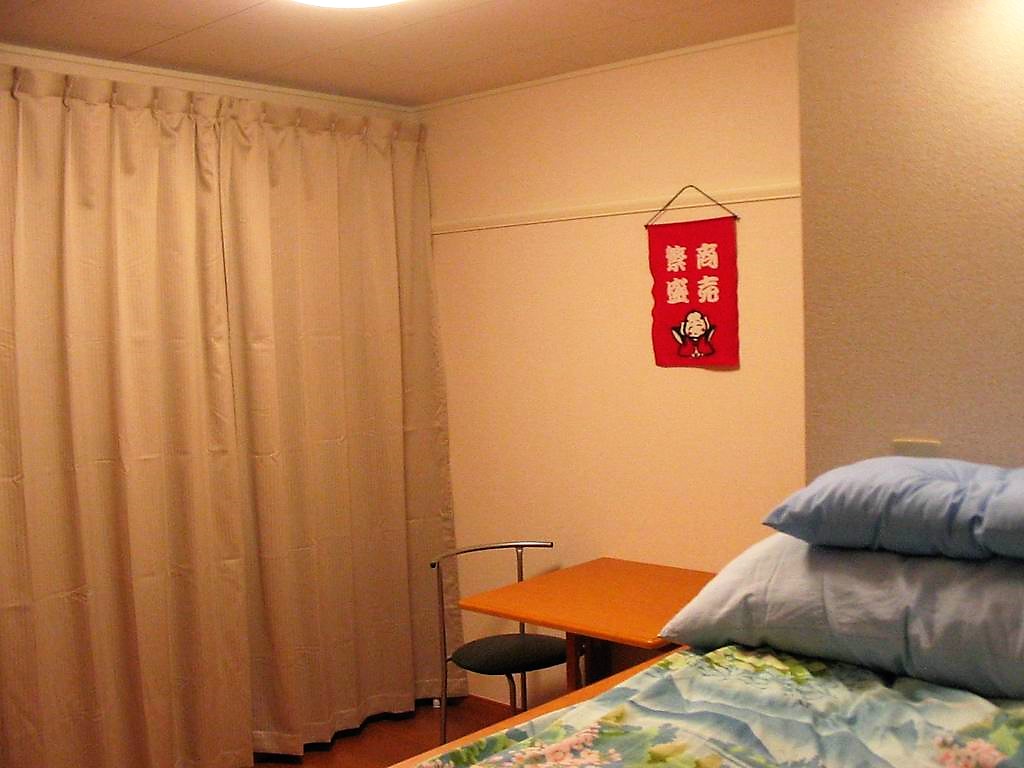 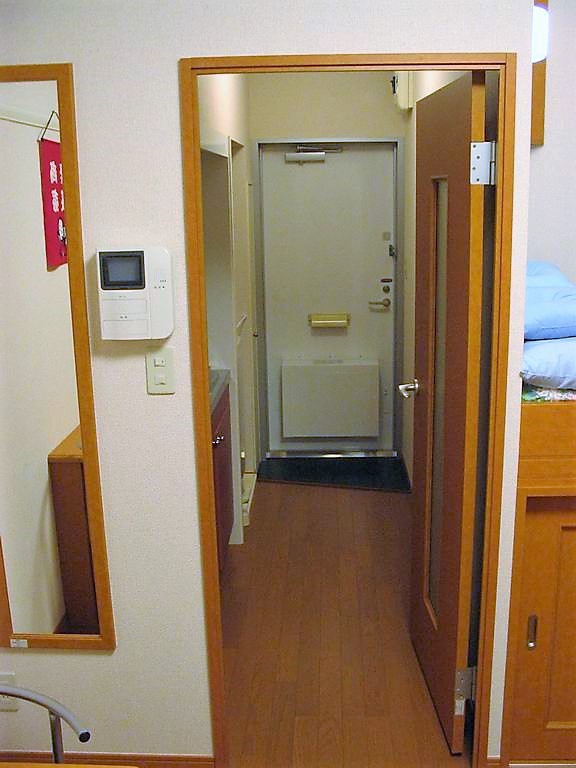 All in all - not a bad amount of space to live in. Really LOADS more than we expected. The only really crappy part is the “kitchen” area. It’s not exactly where you would prepare a gourmet meal for a party of 10.

So all that remains is the bathroom area.

You probably cannot see it but the entrance (doorway) to this area is quite a bit lower (at least 5-10 cm) than the top of my head. The first day I bumped myself so many times that I felt that was going to start bleeding from the ears. Just as well there were no pillows because I couldn’t lay my head down anyway.

Small loo area - which is fairly normal. Not the smallness. I mean the actual facilities.

That's apart from the moerse low toilet and (if you look closely) the little basin on top of the cistern. Cool idea. Just not practical. So you flush the toilet (you can choose between a complete flush of the cistern or just a partial flush), then quickly slap on some soapy substance and stick your hands under the tiny spout until the water stops running. Then you go for the hand-towel. In the process drenching the whole place in water. I suppose it’s the idea that counts though. 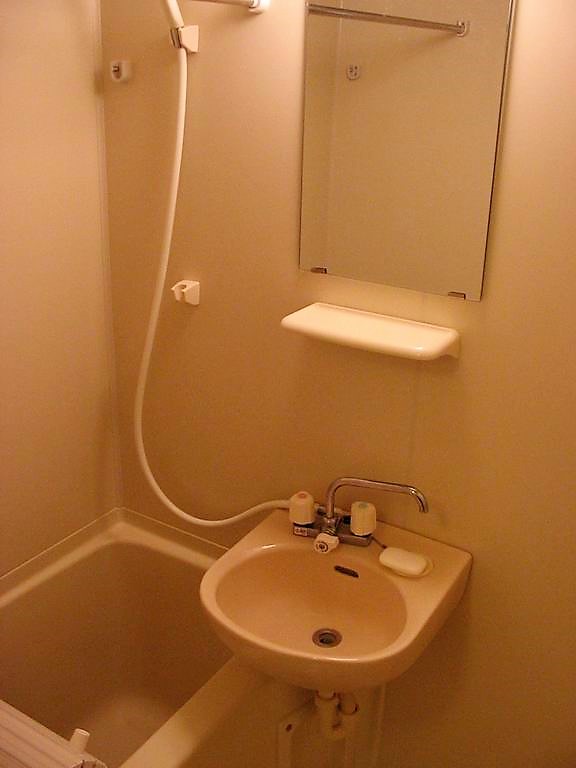 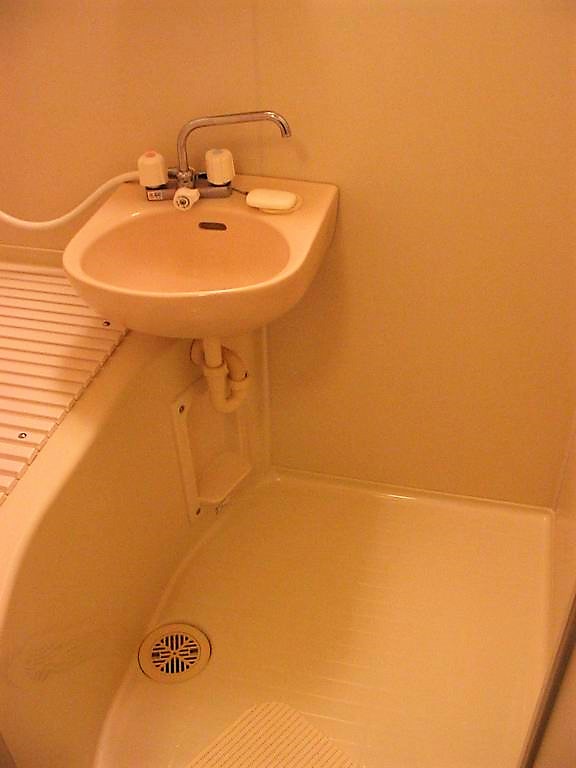 The next door (to the bath area) looks like a shower door. Because it is one.

The whole bath / shower area is a contained area. To the left of the door there’s a little control panel with which you can manage the extractor / dryer. This can be used to either extract the steam / moisture from the room or alternatively to blow warm (or cold) air to dry the room. It can also be used to dry clothing etc. The Japanese don’t seem to have taken to tumble dryers; which is odd since it’s so cold here. One thing you notice about virtually all the inhabited areas are that (maybe for lack of space) it looks rather “slummy” - because of the Japanese way of drying clothes on balconies. They also regularly hang out futons and bedding to air. You can thus barely walk 20m down any road without spotting loads of “stuff” hanging everywhere. This is something we only associate with poor areas in South Africa.

Yet here it’s rather common to see.

Anyways, the shower area has a small (but very deep) bath which also comes with a bath-cover(?). I believe you’re supposed to have a quick rinse with the shower next to the bath then jump into the bath for a soak. Thereafter out of the bath again for another rinse.

I haven’t yet attempted squeezing myself into the tiny bath and it’s probably for the better that I don’t.

Just to provide some perspective the last picture is of looking back from within the bathroom towards the entrance passage.

Really not a bad place to be staying at all. We are the first tenants of this apartment which is very cool. I'm already getting used to ducking lots while walking around. The place is well insulated and also have fantastic whisper quiet air-conditioning. Now all we need is some beanbags to lounge on!