How to climb Mount Kilimanjaro

Mount Kilimanjaro is the highest and youngest of East Africa's three largest volcanoes. The

which straddles the border between Uganda and Kenya. Volcanic activity formed the peaks of Shira, Kibo and Mawenzi which after half a million years saw the mountain reaching an altitude of 5500m. Eventually Shira collapsed into a caldera, followed closely by Mawenzi which rapidly eroded into a sharp, shattered peak. Kibo, however, continued to grow, reaching its present altitude of 5895m. Intermittent eruptions followed, such as the massive lava flow that filled the eroded caldera of Shira and spilt into The Saddle between Kibo and Mawenzi. The volcanoes are now dormant and the likelihood of further eruptions minimal - with permanent ice and snow found only on Kibo. Despite its vanishing ice cap, Kilimanjaro remains a dominant symbol in Africa, and as such is one of the most alluring mountains in the world.

Our route of choice was Rongai Route - the only route that approaches Kilimanjaro from the north, close to the Kenyan border. Rongai has a more gradual slope than the mountain’s other routes and it is a good option if you're looking for an alternative to the popular Marangu route. Perfect if you would like a more remote hike and if you plan on climbing during the rainy season (the north side receives less precipitation). Rongai is a moderately difficult route and is highly recommended, especially for those with less hiking experience. Ultimate Kilimanjaro has a great breakdown of all the routes here. 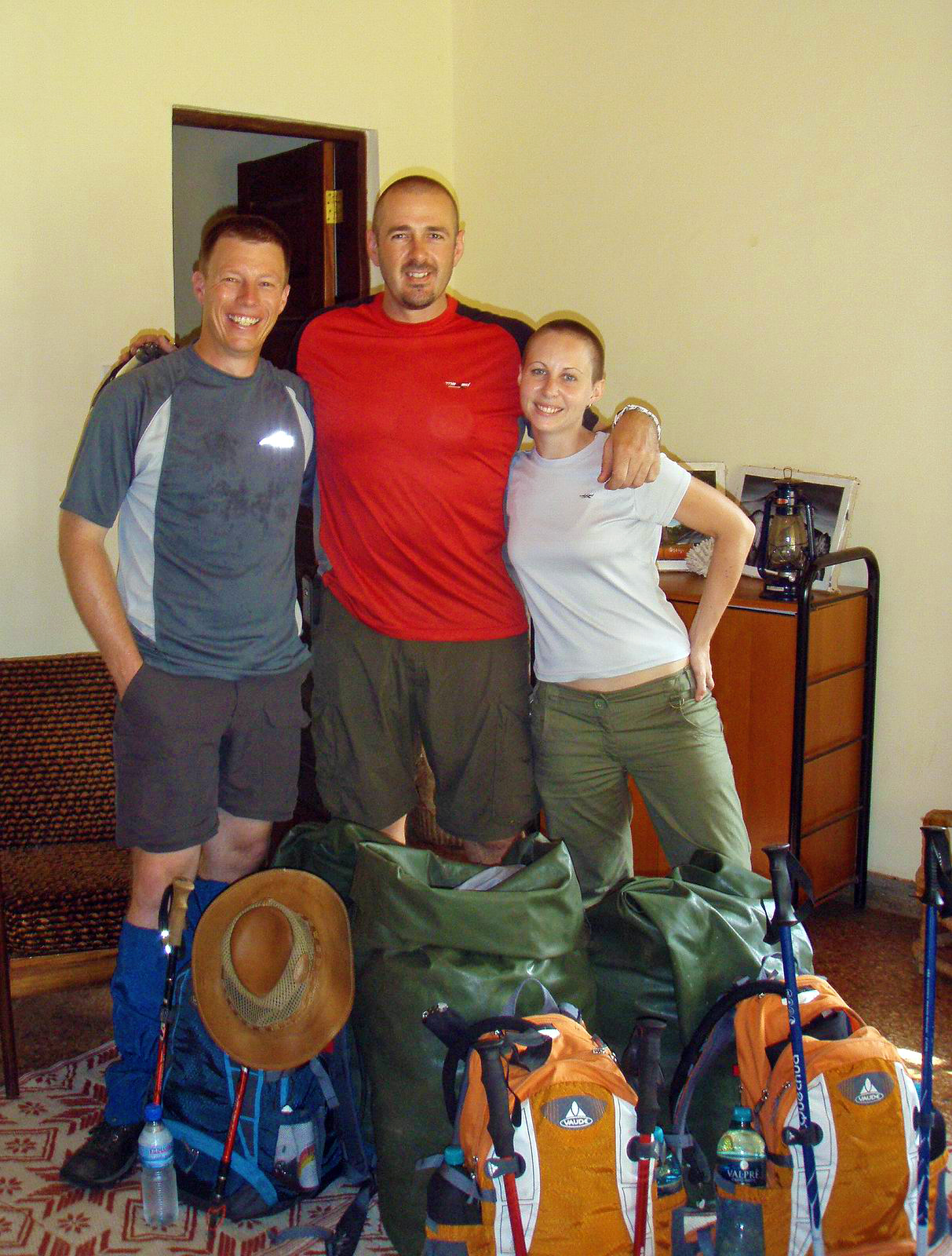 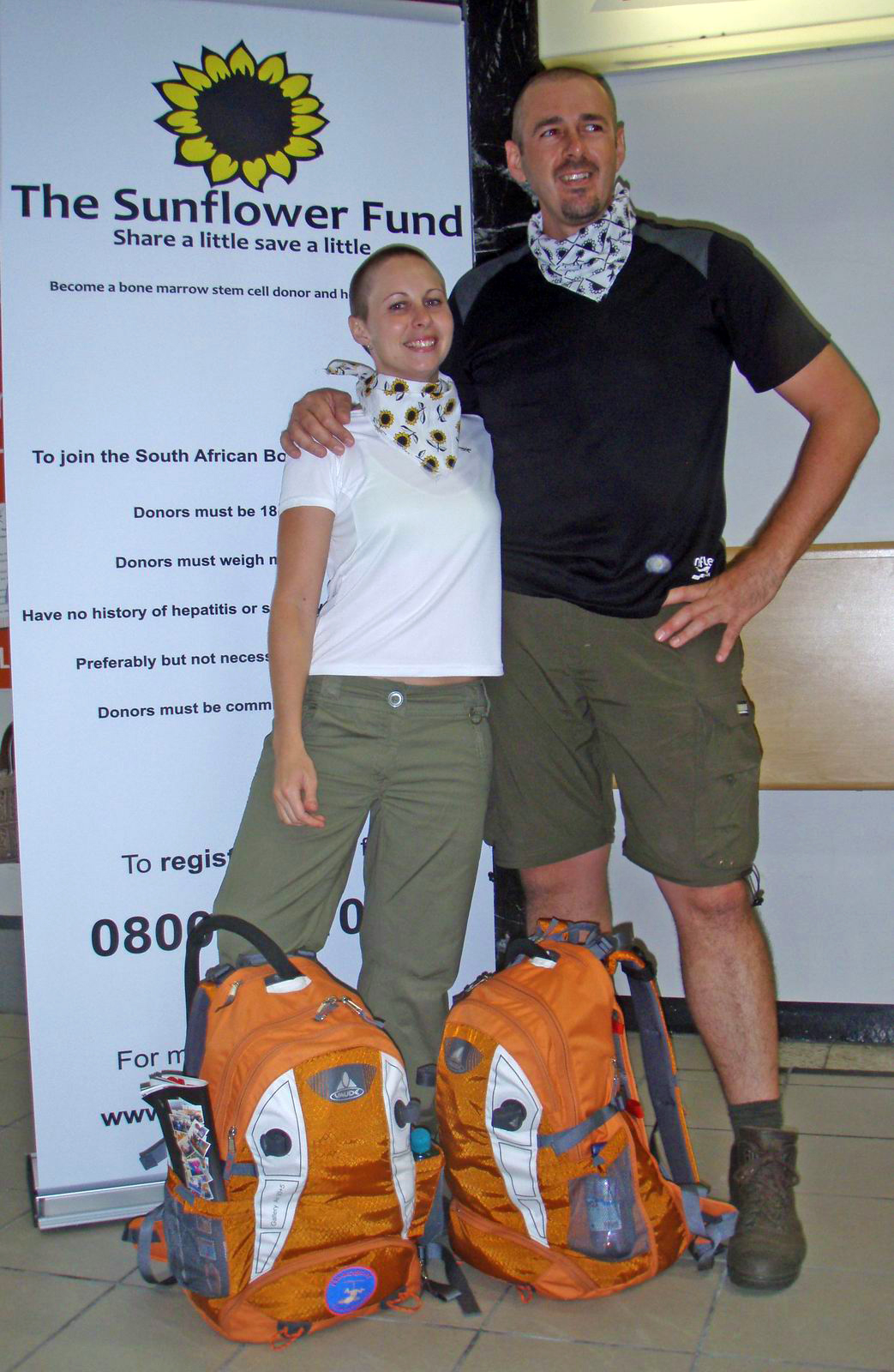 We spent our first night in Moshi after arriving from Dar Es Salaam via a rather long journey that took us from Cape Town to Johannesburg to Zanzibar. Sleeping evaded us as we were super excited for what lay ahead.

The following morning we got collected by our minibus and once the 3 of us, our guides and porters AND all the luggage were squeezed into the taxi, we were on our way. In true “Africa Time” fashion we spent most of the morning waiting around while paperwork was being sorted out.

A 3-hour dirt road ride to the Rongai Gate left us covered in dust - a great start to 7 days without a shower! At the entrance to Rongai Gate, our porters went through the weighing in procedures (they are only allowed to carry 15 kg each) after which we set off with our guide for the afternoon’s walk to Simba camp ( 2830m). The pace was brisk but easy with the vegetation mostly tropical and the temperature still very hot.

Simba camp was bustling on our arrival! The porters had found us a nice camp spot and got the tents pitched quickly after we got our daily bowl of water to wash. The fresh popcorn and hot milo were very welcome! Soon after it was dinner time and not much later we called it a night.

When we woke this morning we could see Uhuru Peak as well as Mawenzi for the first time!

The route was becoming steeper but generally, the path was good and the scenery absolutely amazing. From this altitude we could see the plains and where we had started, we had already come a long way.

We reached our campsite by lunchtime. Second Cave Camp is a beautiful and peaceful campsite - for some reason, it was only our group and 3 Canadian guys staying overnight. We planned a short hike in the afternoon, but the weather turned bad and it rained most of the afternoon and night. We didn’t complain too much and used it as an excuse to rest instead.

The previous night’s thunderstorms brought plenty of snow and Kilimanjaro stood before us almost completely covered in white! We also managed our first glimpse of the glaciers and really started to feel the altitude. The scenery had radically changed with the landscape barren and dry. But it was a beautiful clear morning and a real treat to see Uhuru Peak ahead of us as we walked.

We reached Third Cave by lunchtime again - even the porters moved slower than the day before. Later in the afternoon, we took a short walk gaining about 500 m in altitude to look down on the camp and take photos. Just as we returned, it started to rain and continued through the night.

We woke to a misty morning and found more snow had fallen overnight. The mist soon lifted and spectacular views of Uhuru and Mawenzi greeted us! We followed the steep, winding path for most of the way to Kibo Camp at 4700m which would be our home for the next two nights and also the base from where we would attempt the summit. Suddenly we really felt the effects of the altitude and medication no longer relieving headaches with exhaustion setting in with every movement.

We managed to drag ourselves out of our tents for an afternoon acclimatization hike. Two guides accompanied us for an hour walk along the same path we would be taking in the morning. It was well below freezing by the time we tucked in for the night in our snow-covered tents. 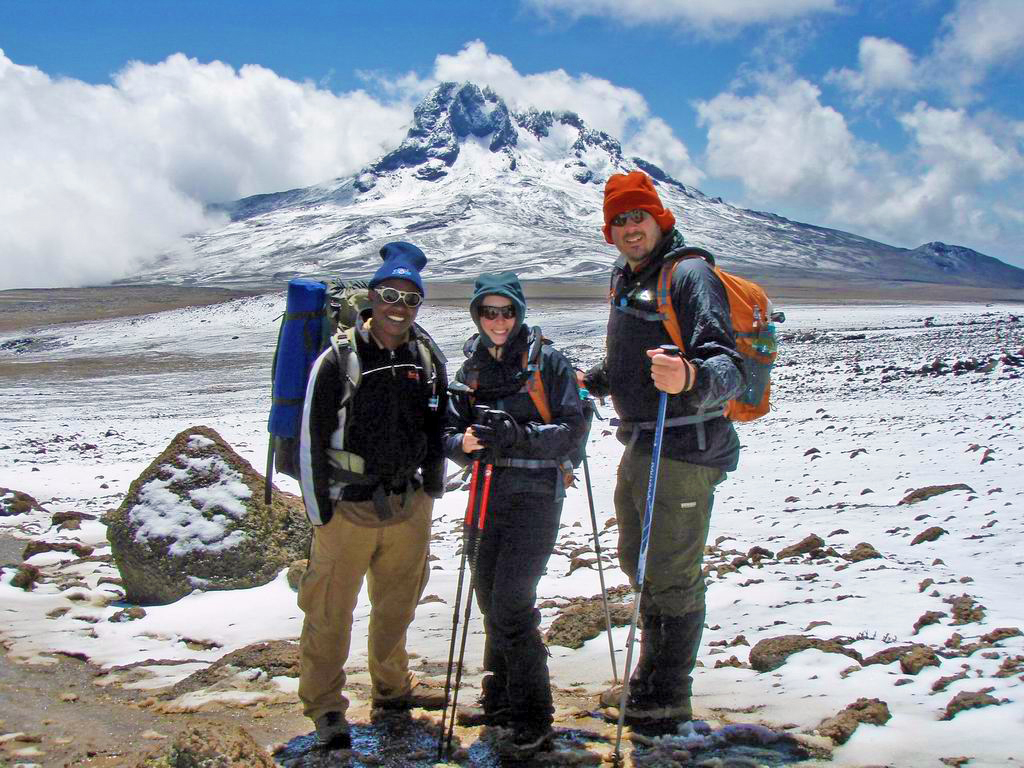 We woke up at 4 am to a freezing minus 2 degrees, had a quick cup of milo, got kitted and set off just before 5 AM. The path zig-zagged up the mountain and was steep and loose. Two nights before there was a massive snowstorm on the mountain and climbers had to endure strong wind and rain but lucky for us the sky was clear and our headlamps were casting spooky shadows on the rocks as we shuffled upwards.

After what felt like hours we finally reached 5000 m just in time for sunrise. Getting closer to Gilman’s point the path got rockier and we were actually climbing at times. It felt as though the top was just there - but in a surreal way, it just didn't get any closer. The last hour was a real struggle and we were both exhausted and elated to reach Gilman’s Point.

We only took 5 hours to get here, but it felt much longer. The walk was fairly easy from there, in the snow around the crater edge. Another two hours took us from Gillman’s Point along the crater rim to Uhuru Peak at 5895m. Although the incline is slight; at that altitude, it’s a struggle to put one foot in front of the other. It’s only willpower that keeps you going at this point. 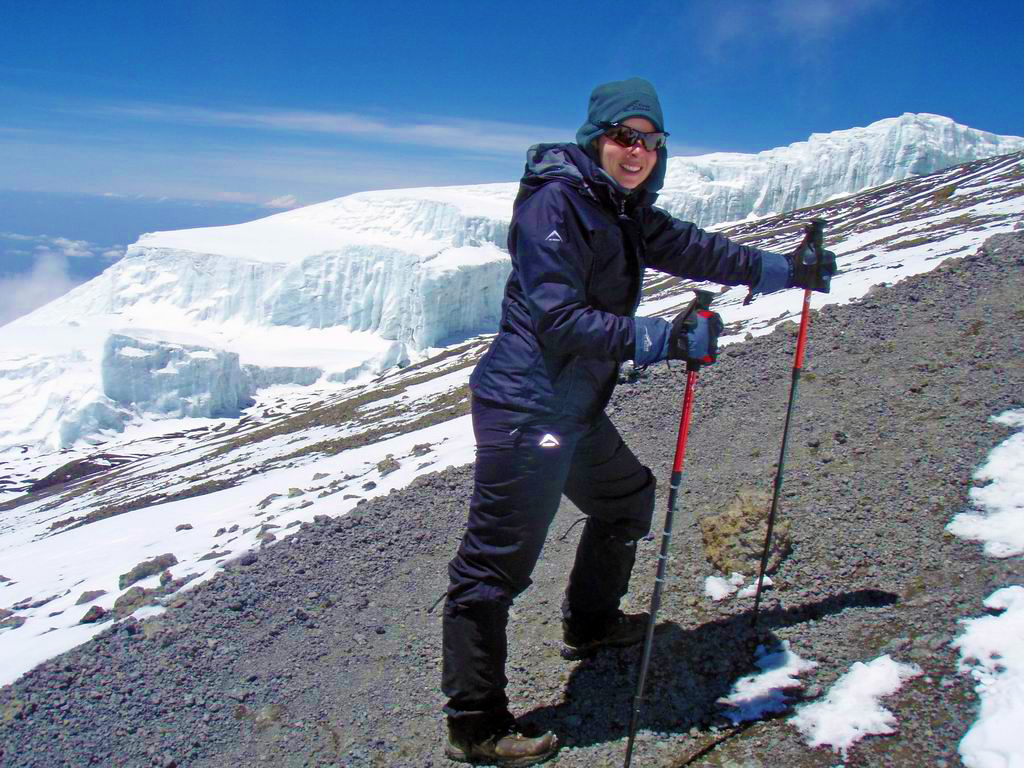 Finally, we made it to the famous sign at Uhuru Peak! It was mid-morning and we were alone on the summit; it felt like a different world! Relief, pride and happiness wash over you in a strange wave of emotions.

The weather was perfect and we enjoyed the scenery for a while before beginning our descent. It took us three hours to get back to Kibo Camp, of which we spent at least an hour in a snow storm. A quick meal and we collapsed in our tents for some well-deserved rest.

The following day we started the long way down. From Kibo Camp, it is another 22 kilometres of downhill to our next overnight stop. It was only at this pint, when we were below 3000m again, that our headaches began to fade. It was uneventful but harder than expected. Walking downhill for such a distance is a real beating for your legs and feet.

The final day was a fairly short leg of 8 kilometres to the Marangu Gate, and we might have been more relieved to reach the end than the summit at that point! Our feet were BUSTED and we were dreaming of cold beers and hot showers! We high-tailed it back to Moshi and had a celebratory meal before passing out from exhaustion.

Sitting there, in the afterglow of the climb, and bidding farewell to the mountain, we faced a

dilemma: what would we tell others about the anxieties, the energy-sapping climb and the intense cold? What could we say about dreams and goals, about the strange magnetism of this mountain, and its beauty? Those who have stood on Uhuru's high snowfields and shared one of the most beautiful views in the world would want to relive the whole thing - the highlights and the low points. They would want to be reminded of the breathlessness of that altitude and the agonising final 1000 metres. Those last 200 metres around the rim of Kibo Crater which seem to take forever.

We did it. We conquered our fears. We attained our goal. We pushed our bodies and minds towards their limits.

Doing is what mattered. Being there on that wind-lashed mountain, freezing cold, aching limbs and burning lungs. To those dreaming of climbing Kili, we cannot really tell you what the forest smells like, or how the wind feels right when you drag yourself out of your tent and gaze up at that mountain. There are no right answers. Only questions.

Is it tough? Will I make it?

The TRUTH about Kilimanjaro

Kilimanjaro: How it Began