Kawah Ijen. A beast of a volcano, just shy of 3000 meters, will leave you gasping. Not only for air but also for a truly unique experience. It's home to the largest acidic lake in the world measuring only 0.7ph (with battery acid being 1ph!).

Visiting MOUNT BROMO - What You Need To Know To DIY

How to visit BOROBUDUR Temple On A Budget

On one side of the crater smoking vents continuously spew bright yellow liquid molten sulphur which is collected and hauled out by miners who make their way up a treacherous rocky path carrying up to 90kg of sulphur on their shoulders at a time. Most of this work is done from late afternoon to the early morning hours to avoid the warmest part of the day. These men can only manage 2 trips a night for which they earn around USD 7c per kilogram of sulphur. The thick intoxicating fumes and smoke they're constantly exposed to reduces the life of the average miner considerably and their job is one of the hardest in the world.

Making the trip into the crater can be daunting. Steep and slippery the 4km route requires you to start your ascent by 2:30 AM. Almost 2 hours later you should reach the crater rim to start the descent to the lake. The blue flames can only be witnessed in the dark and you also need some luck for the noxious gasses to be blown away.

But I'm getting ahead of myself.

This time our train journey was an absolute joy! After we said goodbye to our friends in Probolinggo our train departed for Banyuwangi. First-class and styling!

As we were heading onward to Bali from Java, we figured Banyuwangi would be a good springboard and we'll also have a chance to visit Kawah Ijen. While on the train we researched some local tour operations and found www.blueflametour.com to come highly recommended. The owner, Johanes Tony responded instantly to my email and even offered to pick us up from the train station for a ride to our hotel!

We had a spare day planned to just lounge around the town of Banyuwangi and recover from our Mount Bromo excursion. Banyuwangi is the east-most city of Java and legend has it that the name Banyuwangi meaning “fragrant water” comes from a tale of lust, devotion and fidelity when the king had his eye on his assistant’s beautiful wife. After she refused the king’s advances, he sent his assistant away on a mission and began rumours as to her disloyalty to her husband. The husband believed the gossip and not his faithful wife - he returned to find her in the King’s arms as he was trying to rape her. In a jealous rage, he stabbed her with his dagger and thew her body into the muddy river -which instantly turned as clear as crystal and as fragrant as flowers, proving her purity and loyalty.

The town itself does not have much in the way of sights but there're a few decent beaches and you will find some good local food at the markets. We stayed at Hotel Blambangan (USD 24 per night including breakfast), which was located right in the centre of the city and close to a local park with a great selection of street food. There was some sort of expo in the centre of town and we were invited to attend the opening ceremony. If you can plan ahead have a look at available accommodation on both Agoda.com and Booking.com.

Our pickup was at 00:30 AM from our hotel and although only about 35 km’s it took more than an hour to reach the entrance to the national park. After registration, our guide wasted no time in hitting the trail as it was a stiff 2 hours of climbing. The night sky was full of stars and we could faintly see the Milky Way.

The closer we got to the top, the more we could smell the sulphur in the air. I tried to breathe through my bandana, though this seemed to have little effect. Once atop the crater itself, we were given gas masks which made breathing here a little easier. 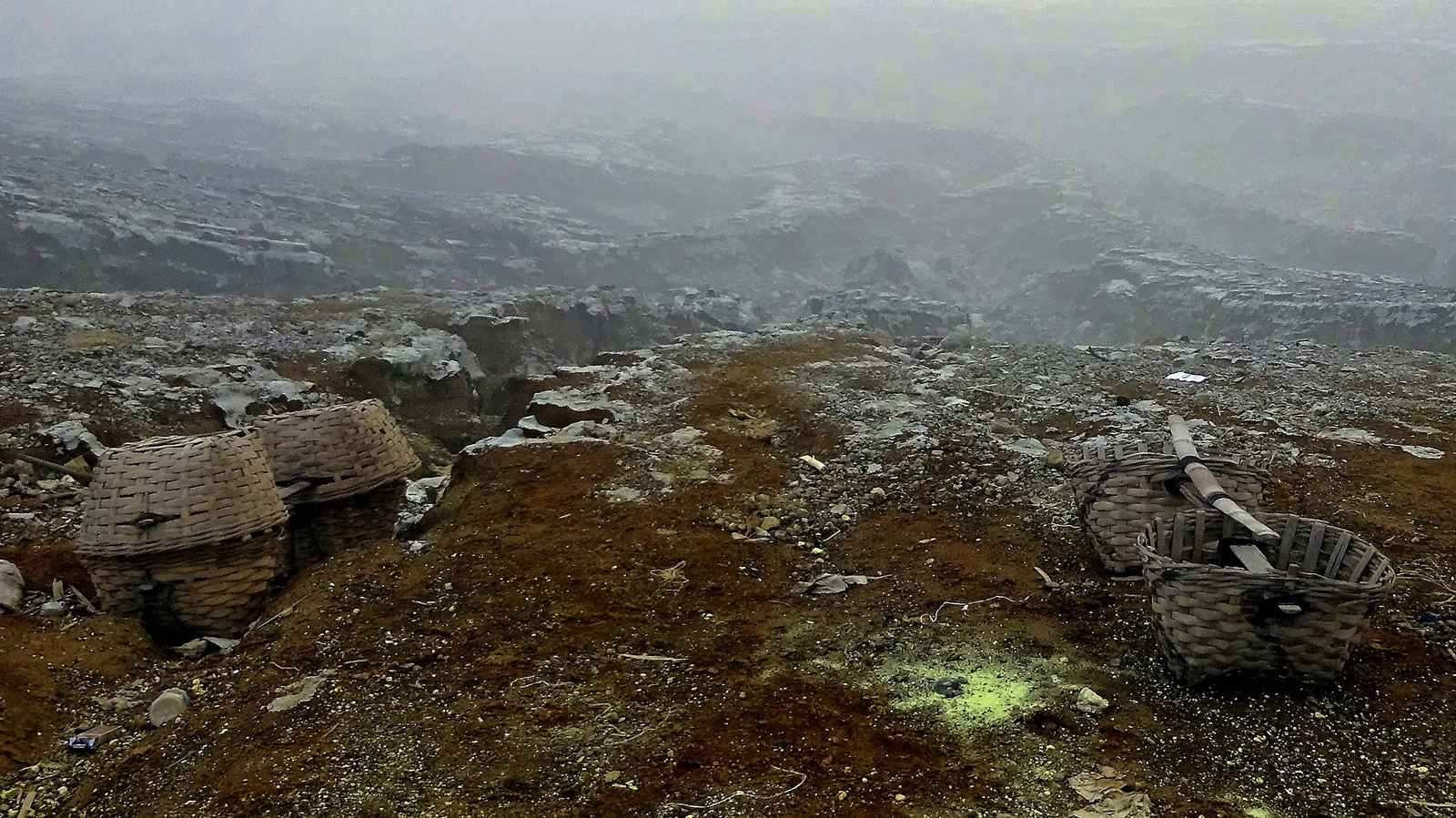 It was another 30 minutes of descent down into the crater and we could already see the blue flames below. The flashlights and headlamps shining in different directions along the path made it look like we were on an expedition on another planet.

When we were almost all the way down into the crater, we attempted to take some photos but it was incredibly difficult getting a lock on anything with barely any light around. The only option is to use a longer exposure and hope for the best!

From time to time, one of the miners would pass carrying baskets of sulphur back up the mountain. While the Ijen crater is an amazing attraction, you do have to spare a thought for the local miners who work here tirelessly all night, extracting big blocks of elemental sulphur and carrying up to 90 kg of the stuff up and down the mountain. The sulphur earns them a mere pittance and the health hazards clearly make this an unenviable job. A few of the miners have branched out into sculpting sulphur into small souvenirs, but for most of them just mining the material is their only source of income.

After a bit of a rest, we hiked back up to the crater rim to get there for the sunrise. Although there was some low hanging cloud at times the reveal was spectacular and we could now see the yellow sulphur rocks below next to a beautiful azure crater lake that we had been completely oblivious to in the dark.

With the sun now shining its first rays we noticed a sign that had been put up at the crater rim stating that it’s officially prohibited to go down the crater!

Seeing Ijen is quite an adventure, and we found it almost more exciting than seeing the nearby Mount Bromo. Bromo is the main tourist attraction in East Java, though while undeniably stunning, Bromo doesn’t have the same air of mystery (nor blue flames!).

As with many sights in developing countries, it does feel a little strange to be at Ijen for fun while other people toil away there day after day just trying to scrape together a living. Hopefully, the working conditions for the miners will improve. One way to support the miners working at Kawah Ijen is by making a donation to Ijen Assistance. The organisation raises money to build trolleys for the miners and also to sponsor miner’s children through the local schools.

Our visit to Ijen stayed with us for some time… both figuratively and literally, as our clothes continued to smell of sulphur even after laundry and all silver jewellery turned black. But it was a small price to pay for visiting such an extraordinary place.

HOW TO SEE IJEN:

We tried to research how to do this independently but it seemed quite complicated, and in retrospect, this would have been unlikely to have given a better experience. A guided tour is an easier option but it’s still possible to keep it simple. As we were heading to Bali anyway, we figured a good base would be the town of Banyuwangi. While on the train we researched some local guides and found www.blueflametour.com to be highly recommended. The owner, Johanes Tony (+6285235991411) responded instantly and even offered to pick us up from the train station for a ride to our hotel. Total cost for 2 people was IDR 350 000 and included transport, guide, gasmask and water. They even took us past a local waterfall afterwards and treated us to some local delicacies. Just take note that the entrance fee to the park is an additional IDR 100 000 per person and payable at the gate.

This video shows us arriving in Jakarta and travelling via Yogyakarta and Surakarta (Solo) on to Mount Bromo near Probolingo and from there to Kawa Ijen near Banyuwangi. It was made before we started our Youtube channel and was mainly recorded using compact cameras.

Back to INDONESIA Travel Guide

See All Posts On INDONESIA