FILIPINO FOOD GUIDE & What To Eat In The Philippines

​Filipino cuisine has developed from the many different cultures that have helped shape the Philippines history. It has created a wonderful melange of Indian, Chinese, Malay, Spanish, European and American influences.

Its cuisine may not be as renowned as many of its neighbours, but Filipino cooking is distinct in that it is possibly the least spicy of all Southeast Asian cuisines! Don't make the mistake of thinking that Filipino food is bland, though - instead of spices, Filipino food tends to depend more on garlic, onions and ginger to add flavour to their dishes. Vegetarians and vegans might have a tough time finding a Filipino dish which is wholly vegetarian as most of the Filipinos love to add meat to every single dish they eat.

DESSERTS & SNACKS Of The Philippines

This is without a doubt the national dish of the Philippines. It consists of chicken or pork (or both), served in a garlicky stew with vinegar and soy sauce as a base. The best adobo has a perfect balance of soy sauce, and vinegar with added flavour from garlic, bay leaves and freshly ground peppercorns. We loved the richness of Filipino pork adobo and had many delicious servings during our 2 months in The Philippines.

Kanin means rice. Why not try Kanin Sinangag - fried garlic rice, often mixed with vegetables, dried shrimps, dried fish strips, hot-dogs or chorizos. There's no holding back on the garlic and it's meant to knock your socks off! You can partner Sinangag with Tapa and Egg (Tapsilog), Sinangag with Longganisa and Egg (Longsilog) and more.

Kakanin means Rice Cakes. The history books will tell you that kakanin used to be made by Filipinos as a special offering to gods back in the day. There is also a lingering belief that kakanin - sticky and sweet as it is - symbolises the close relationship of Filipino families and friends. Nowadays, the term "kakanin" doesn't necessarily refer to something made only with sticky rice (malagkit). Treats made with coconut milk(gata ) or locally-grown root crops are now considered kakanin, too. 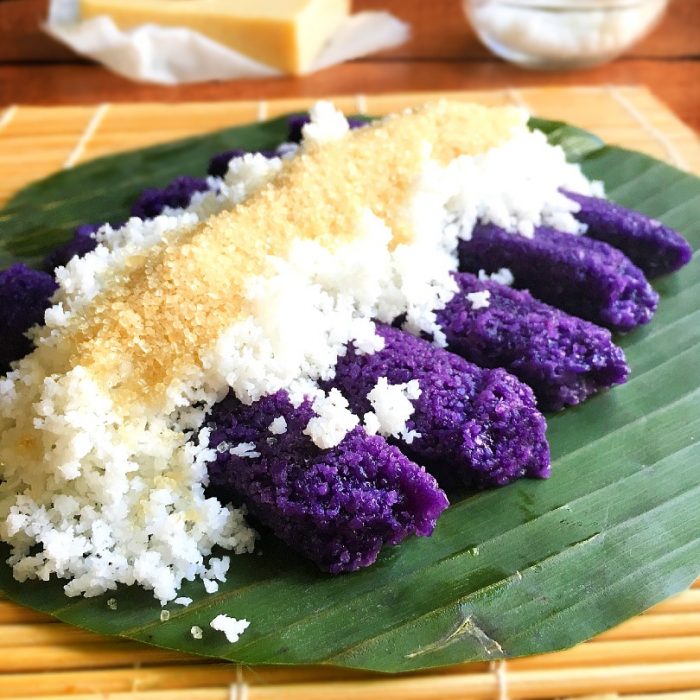 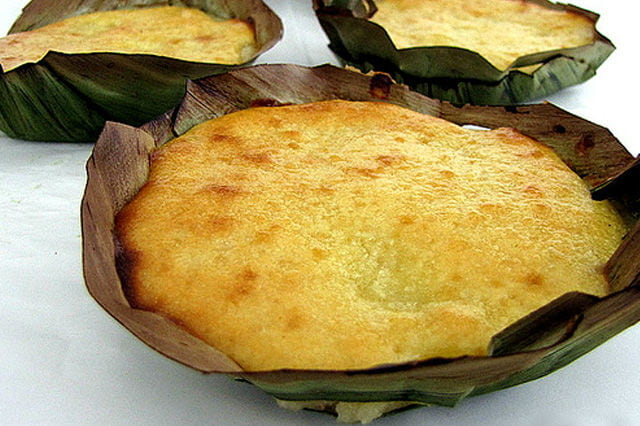 Amongst others, you will find the following varieties:

Noodles, which are an influence from Chinese cuisine and believed to give long life because of their length! Noodles are thus often eaten in celebrations such as Birthdays and New Year. 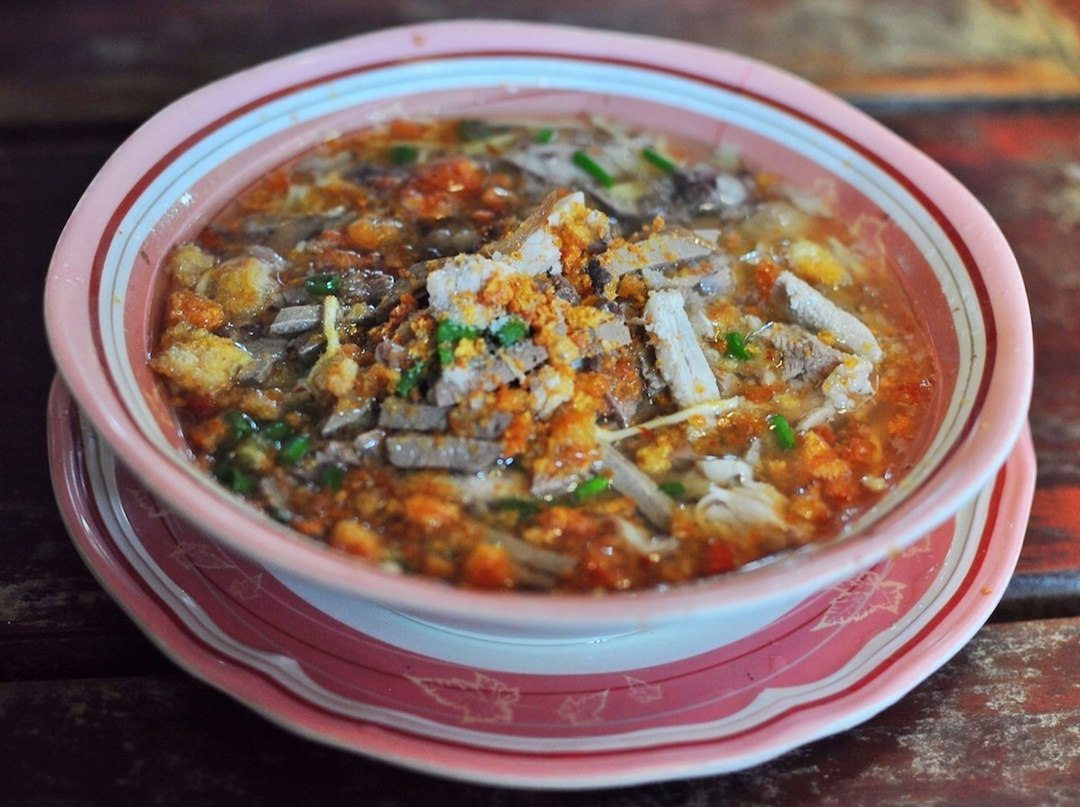 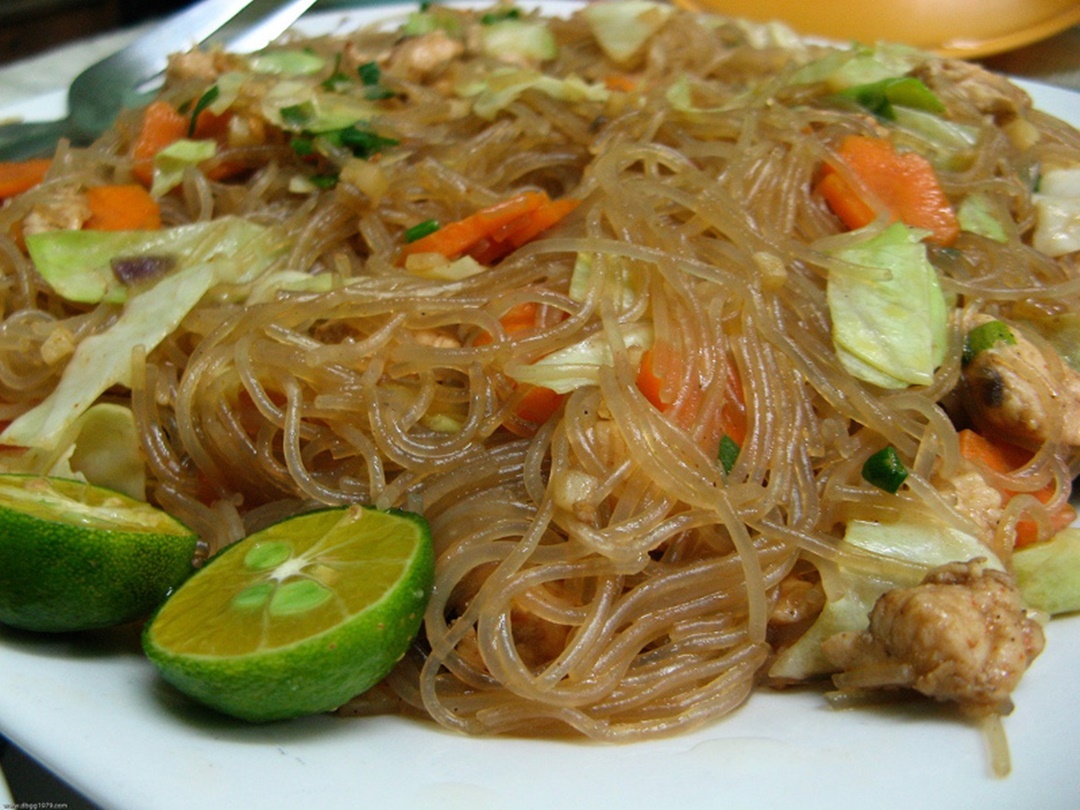 These are a few noodle varieties:

A typical breakfast staple, this is the Filipino version of an American breakfast of egg, bacon and pancakes. The word Silog is a contraction of the two Filipino words Sinangag (fried rice) and Itlog (egg). You can find Silog not only at most Filipino eateries and street stalls but even in restaurants and some fast-food chains such as McDonald's. 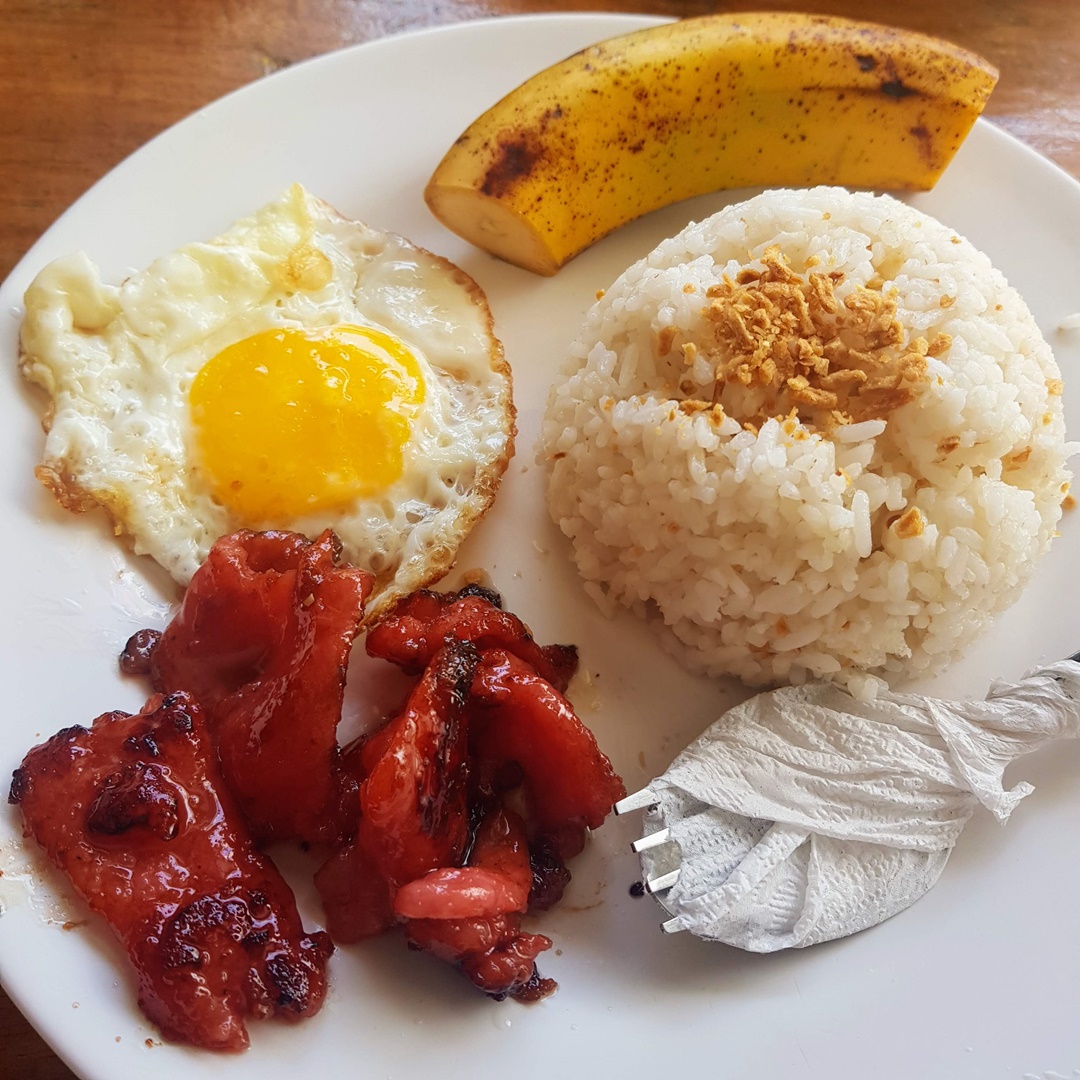 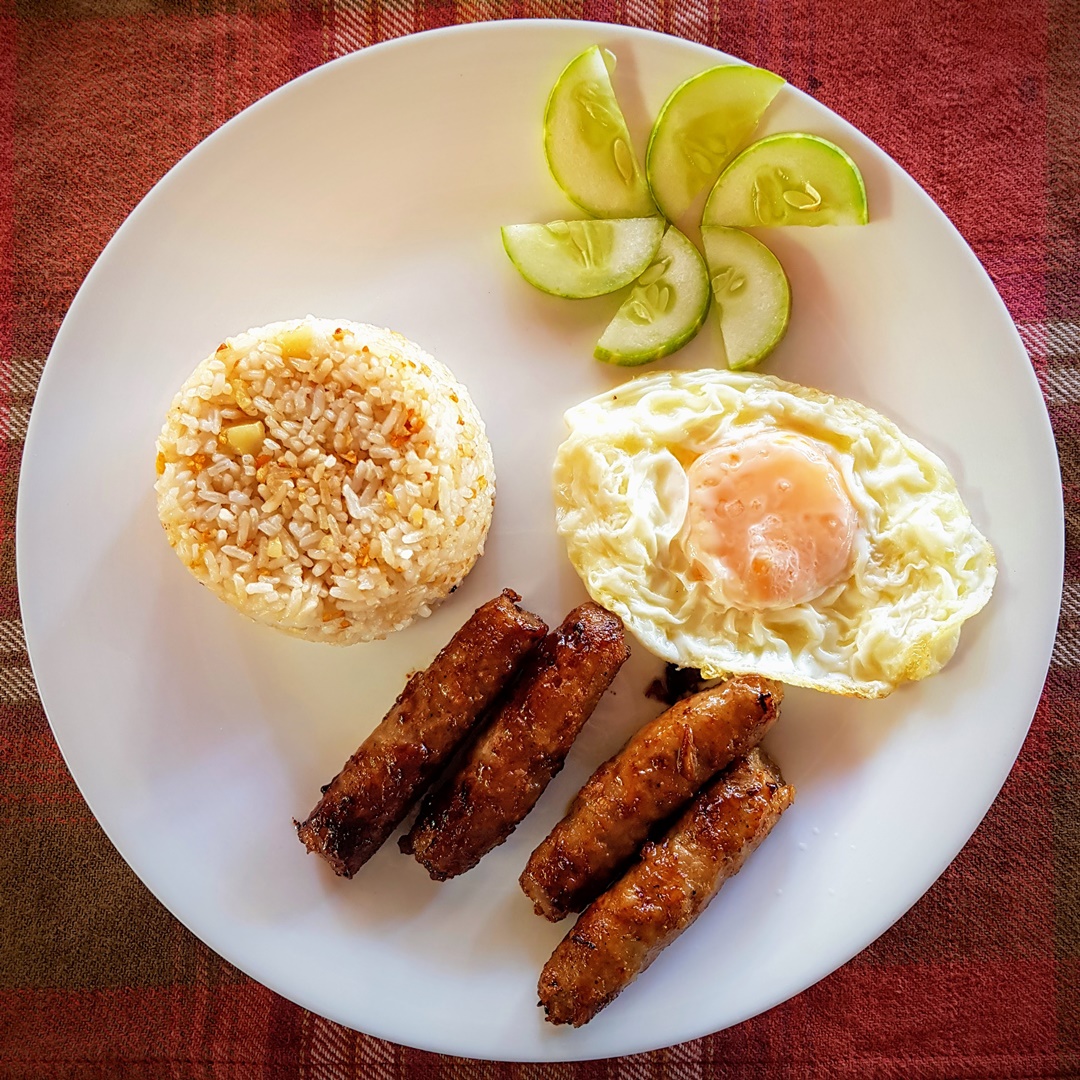 You can find the following variations of Silog:

A slang term for a breakfast that mainly consists of Pande Sal (bread), kape (coffee) and itlog (egg).

Also known as 'Chocolate Meat', this is a dark stew of diced pork and pig's blood. Usually served with big green chilli (which caught us by surprise!) and best eaten with puto. 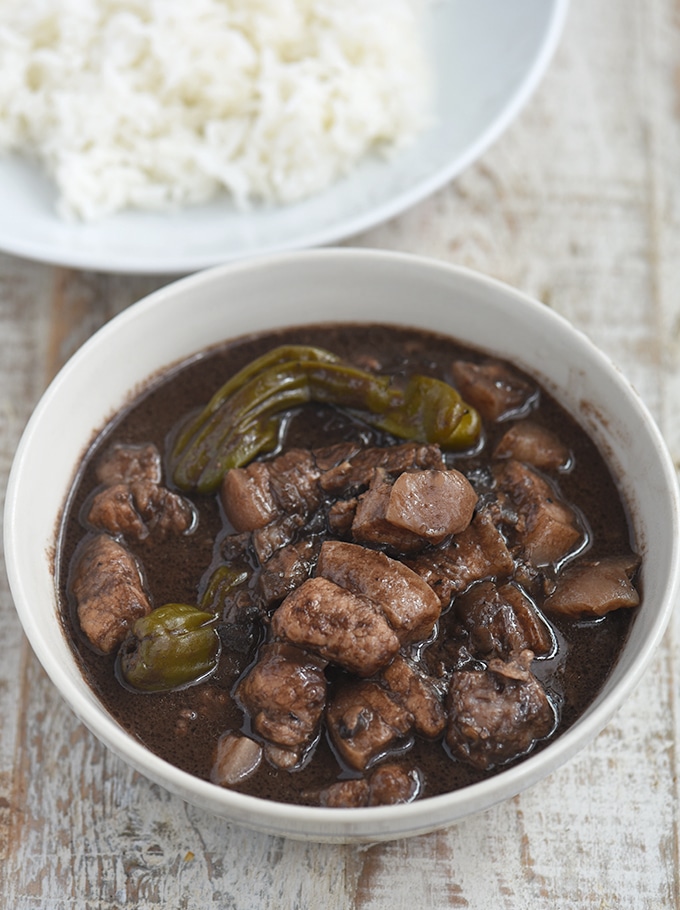 A peanut like stew of vegetables and meat simmered for hours on end, usually beef with tripe and tail and eaten with a side of shrimp paste (bagoong).

Slow-roasted baby pork usually served during larger occasions. The crispy skin is delicious and is often the first part that is consumed. Especially on weekends, you will find lechon stalls popping up with whole pigs on display ready to be carved! They are more often than not found near churches (ready for the congregation after service) and in areas that were located far from the wet market. Different areas flavour lechon in different ways. When you open the roasted belly, you can smell the lemongrass, the spring onions and Bermuda onions, cloves, black pepper. 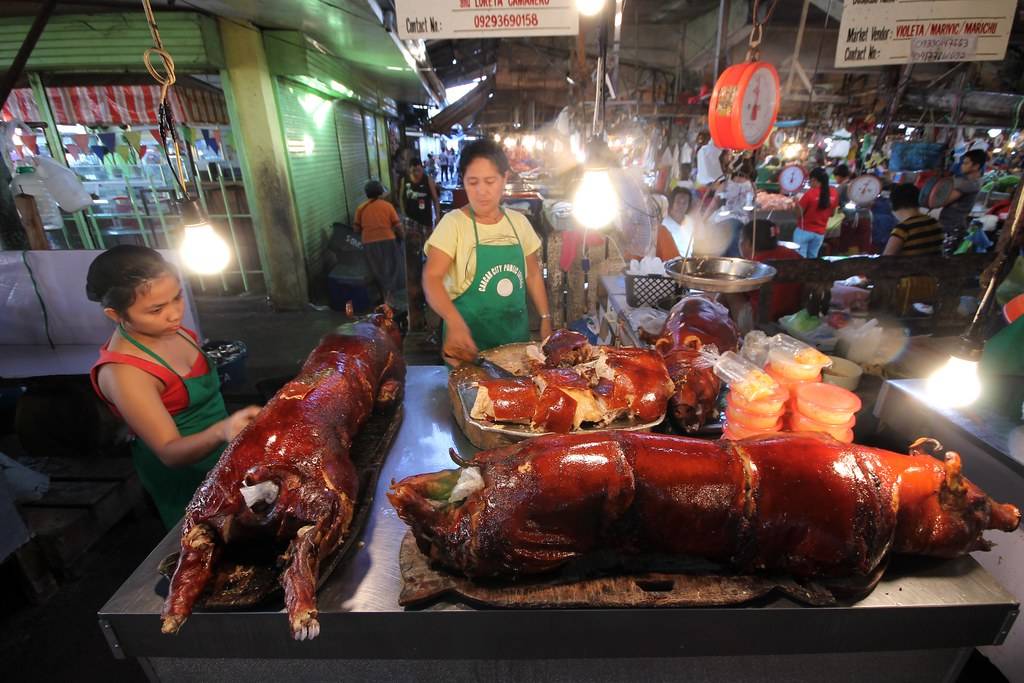 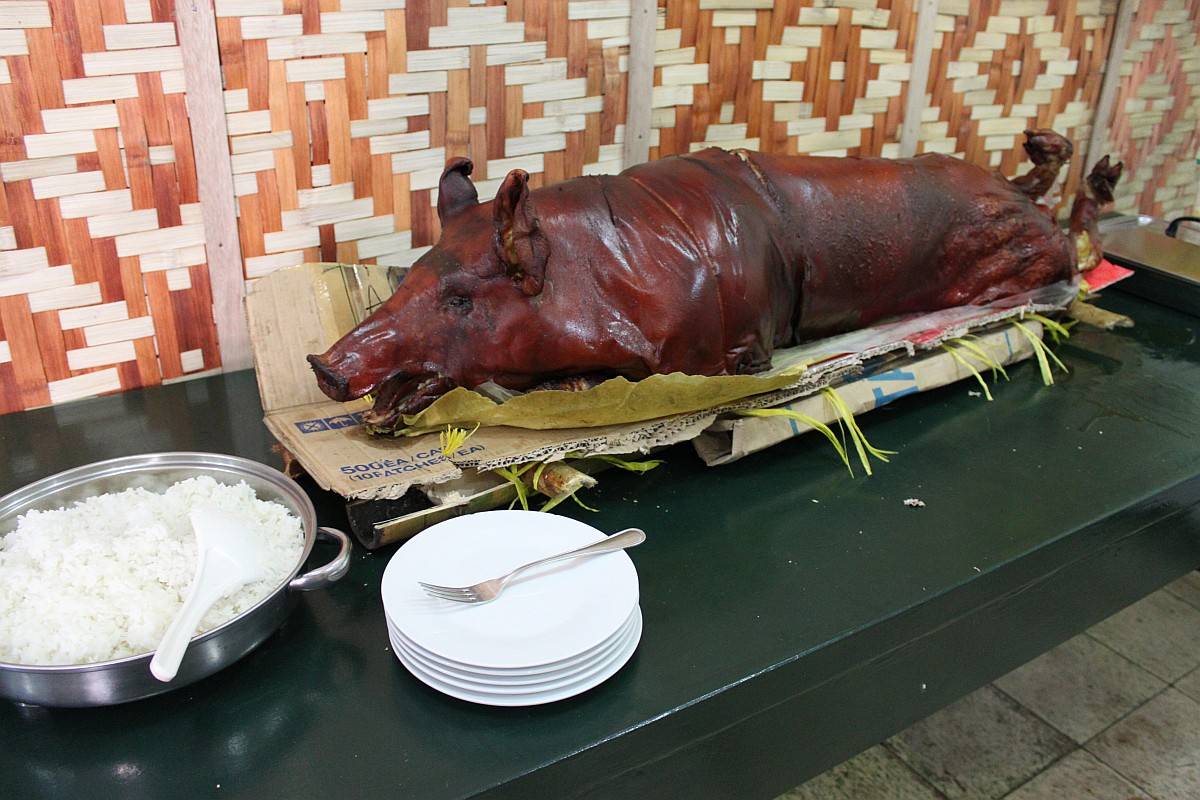 Pinakbet is an indigenous Filipino dish originating from the northern regions of the Philippines. It is made with mixed vegetables steamed in shrimp or fish sauce. The word Pinakbet is the shortened form of the word pinakebbet, meaning "shrivelled" or "shrunk" in Ilokano.

Pinakbet, an indigenous Filipino dish from the northern regions of the Philippines

This Filipino rice and chicken dish is characterised by its strong infusion of ginger and is typically garnished with scallions, toasted garlic and black pepper. It is usually served with condiments of calamansi or fish sauce and a hard-boiled egg.

Most likely introduced to the Philippines by the Italian-American during the American colonisation, this spaghetti is unlike any Italian version for sure! Filipino spaghetti is a local adaptation of Italian version with a distinctively sweet Bolognese sauce, usually made from tomato sauce which has additionally been sweetened with either or both brown sugar and banana ketchup. It is often topped with sliced hotdogs or smoked longganisa sausages, and grated cheese. It is regarded as comfort food in Filipino cuisine and can typically be served for almost any occasion, especially for children's birthday parties.

World War II seems to be responsible for the invention of the Filipino Banana Ketchup. Rumour has it that when tomato ketchup ran out, people complained bitterly and this is what lead Filipinos to consider using banana instead of tomato to produce a similar product as they had a high production of bananas. The Filipino Banana Ketchup is made from mashed banana with added sugar, vinegar, and spices. Its colour is actually brownish-yellow, but you will often find it dyed red to closer resemble tomato ketchup. Interestingly, it doesn't taste much like banana at all and actually closely resembles traditional ketchup. Make sure you taste it alone and then feel free to add it to pork chops, chicken or even spaghetti.

Adidas is a slang name used by the locals to refer to barbecued chicken feet often sold by street vendors.

Another slang name for chicken or pigs blood that has been barbecued. It is called beta-max because its shape is cube-like and resembles a beta-max player. It's pretty much coagulated chicken or pigs blood, shaped in squares and placed in skewers that is served hot off the grill. It has a liver-like texture and is often enjoyed with a good dosing of BBQ marinade and vinegar. Betamax is the cheapest merienda (afternoon snack) next to the grilled chicken intestine.

A fertilised egg which has been incubated for a period of 14 to 21 days (depending on the local culture) and is then boiled or steamed and eaten directly from the shell with a sprinkle of salt and vinegar. These are most traditionally duck eggs and Balut that has been incubated for longer periods tend to have a well-developed embryo and sometimes the features of the little duckling are even recognisable. The partially-developed embryo bones are supposed to be soft enough to either chew or swallow as a whole. Balut is a high-protein, hearty snack sold by many street vendors and are supposedly also believed to be an aphrodisiac. I hope you'll forgive us for choosing to give this one a skip!

Originally from the Chinese, Kikiam is pork meat with vegetables which is wrapped in bean curd sheets.

Kwek Kwek is also known as 'Orange Eggs' due to its colour. Typically, quail eggs are boiled and coated with an orange coloured batter and then deep-fried until the batter is nice and crispy. This street food and is often sold along with other bite-sized snacks such as chicken balls, fish balls and squid balls. The larger version of Kwek Kwek is actually called Tokneneng and is made from chicken or duck eggs.

These skinny pork spring rolls can be enjoyed either as a snack or as an accompaniment to many a Filipino meal. We just couldn't get enough of them!

This could be the Filipino version of a dim-sum. The large doughy bun is usually filled with either chicken or pork and is a popular snack sold by sidewalk vendors and bakeries in the Philippines. You will find different varieties based on the filling: asado or bola-bola is a combination of pork, beef, chicken and shrimp or even salted duck egg.

Back to PHILIPPINES Travel Guide

See All Posts On The PHILIPPINES

CEBU CITY Travel Guide - What To See And Do, How To Get To Cebu City & Around Cebu City

MOALBOAL, PHILIPPINES - What To See And Do, How To Get To Moalboal & Get Around Moalboal