Travel Guide To the PEST Side Of BUDAPEST

The Pest side of Budapest may be best known for the incredible Hungarian Parliament building, but there's a whole lot more to this vibrant side of the city that is sometimes referred to as the 'New Town' and which is filled with hip bars and restaurants. In contrast to the historic and hilly Buda area, to the East of the Danube river, Pest is wonderfully flat which makes it fun and easy to explore on foot or by bicycle. Our video Pest vs Buda. The Best of Budapest takes you along as we spend the day exploring the PEST side of Budapest.

The Ultimate BUDAPEST What To See And Do Guide

What To See And Do On The BUDA Side Of Budapest

Free Things To See And Do In Budapest

Hungarian Parliament Building - This elaborate Neo-Gothic Parliament Building is also the biggest building in Hungary and is every bit as impressive in real life as the many perfectly captured photos of it. We happened to be at the front of the building (non-river side) just in time to see the changing of the guards at 12:30, which although interesting enough, was not as spectacular as one may expect. See for yourself in our YouTube video or compare it to the changing of the guards at the Hungarian President Palace Guards (Sándor Palace). Personally, we enjoyed the half-hourly mist fountains (also just outside of the Hungarian Parliament Building) much more. The water jets are so fine that it looks like there is a mist floating over the square.

Shoes on the Danube Bank - In addition to being a visual work of art, these waterside shoe sculptures are also a sombre memorial of those who were held to gunpoint, told to remove their shoes and then killed along the Danube riverbank during WWII. Take some time to read up on the tragic historical event so that you can understand the significance of this memorial.

Liberty Square - This public square is a nice place to enjoy a walk in the park while admiring the Art Nouveau style architecture of the surrounding buildings and learning a bit about Hungarian history from the many monuments within the park.

Wall of Water Dancing Fountains - This interactive fountain in just across from the Liberty Square Park Entrance. There is a strange fascination with being able to walk through this "Wall of Water" and it can entertain both young and old for ages!

Hold Street Market – This indoor market was established in 1891 but has been recently renovated. The modern market hall is divided into two large farmers’ markets where you can find fresh fruit and vegetables as well as Hungarian specialities. The Downtown Market is also a colourful gastro spot lined with bistros and street-food kiosks that brings a traditional countryside market atmosphere right into the heart of the city. Be sure to try some local Hungarian food here!

St. Stephen's Basilica - Named in honour of Stephen, the first King of Hungary, this church is of equal height to the Hungarian Parliament Building, which is said to symbolise that worldly and spiritual thinking have the same importance. At 96m, these are the two tallest buildings in Budapest and it's well worth climbing up the 365 spiral stairs of Saint Stephen's Basilica to the lookout balcony for stunning views out over the city. You can grab a glimpse of the view in our YouTube video. The area in front of Saint Stephen's Basilica is a great place to hang out people watching. And while you're there, be sure to grab a rose sculptured ice-cream!

Gelarto Rosa - No, it's not a spelling error and yes, there is more than one shopfront, so you can conveniently choose the one with the shortest queue! These rose petal-shaped ice-creams are every bit as delicious as they are beautiful! And to be honest, the price premium that you pay for such artisanal skill is even worth it - that coming from budget travellers! 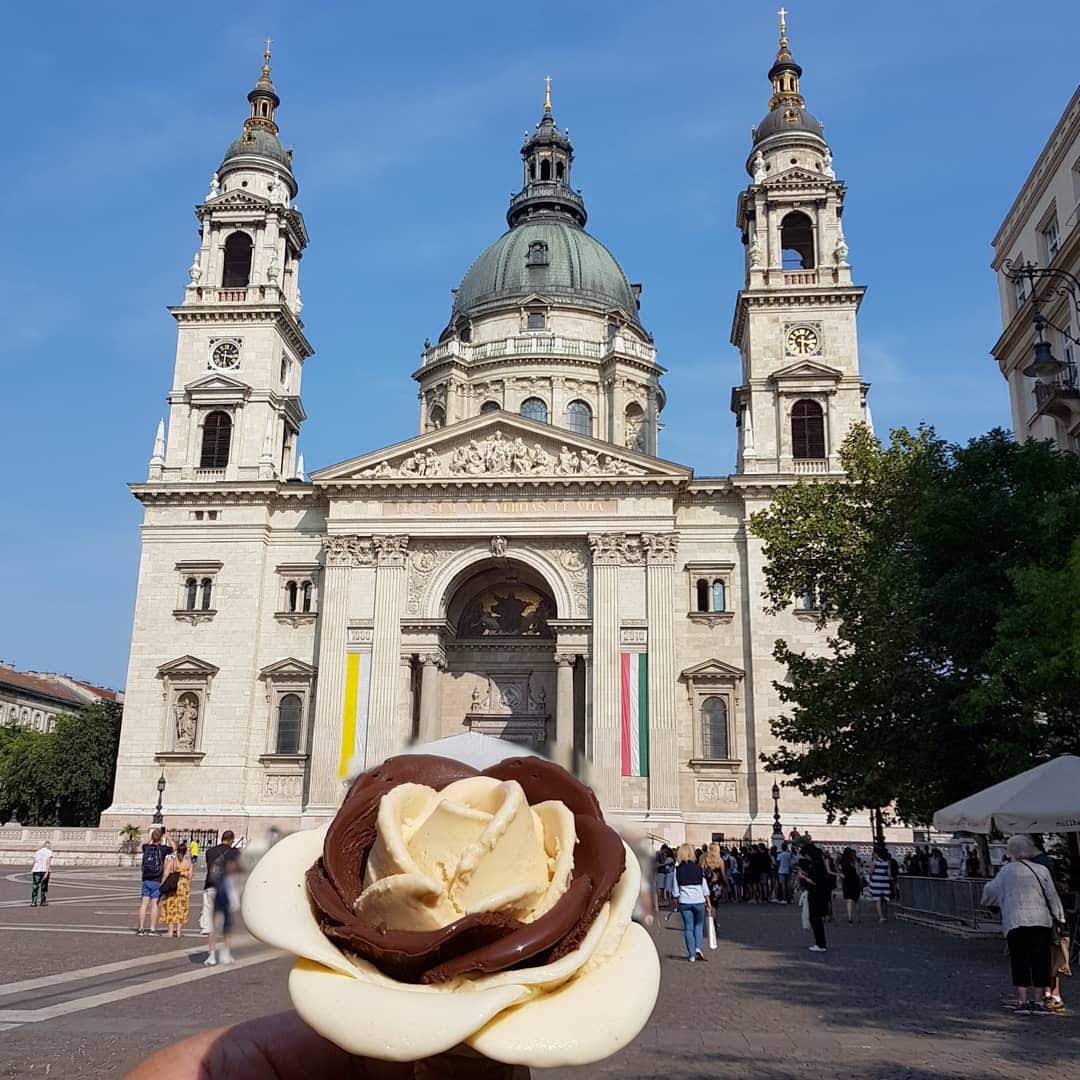 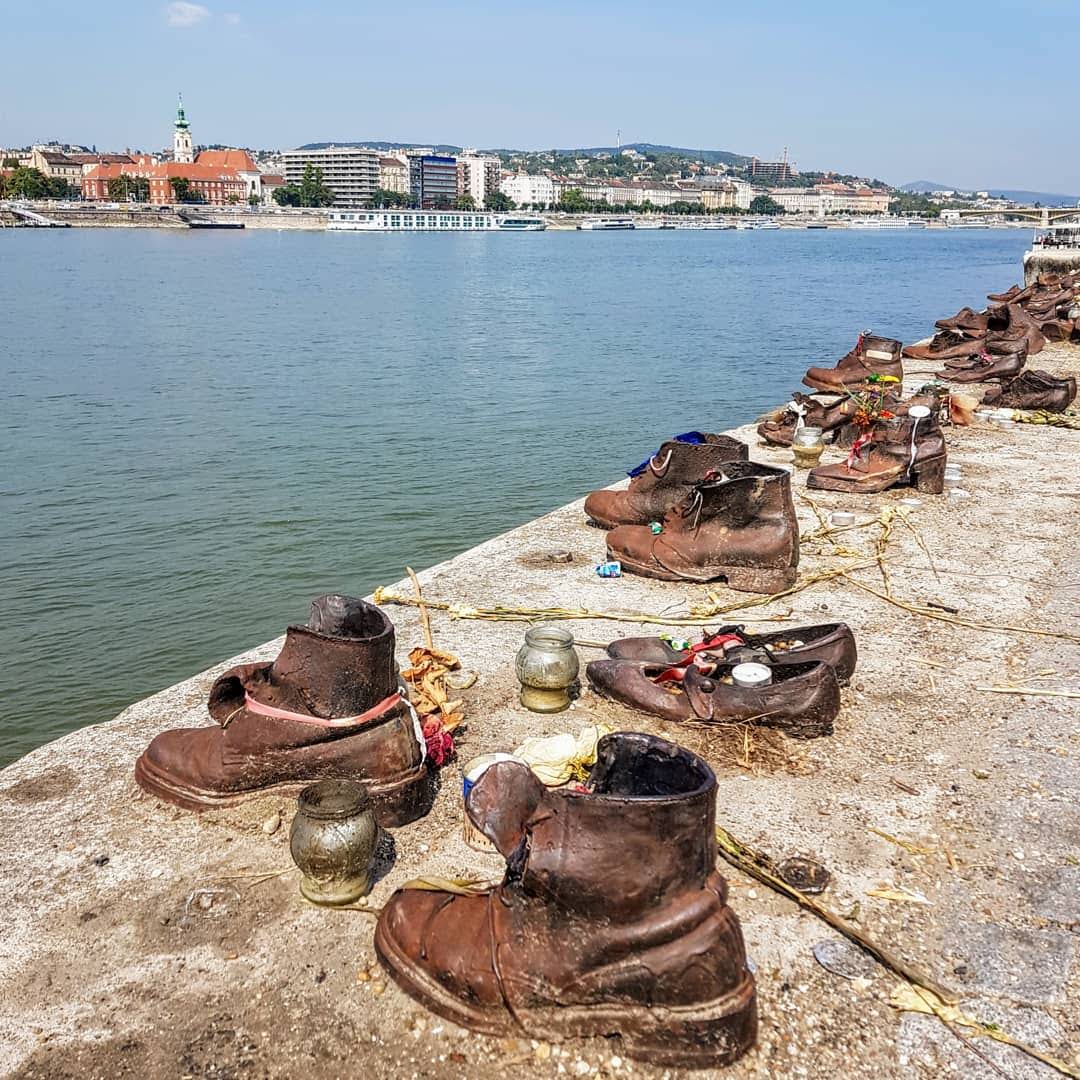 Budapest Eye - Located in the Elizabeth Square public park, this giant 65m high Ferris wheel ride offers great panoramic views and is good fun. You can also hang out and picnic in the park square and there is usually some form of local activity and entertainment happening here.

Gozsda Court - In the area surrounding the hotel, you'll find a maze of pedestrian streets with hip cafes, pubs and shops. With activity increasing towards the evening, this can be one of the busiest areas for locals.

Dohány Street Synagogue - Ornate domes top this lavish Moorish-style synagogue, which was built in 1859 and is the largest synagogue in Europe with a seating capacity of 3 000. The synagogue is located in the Jewish district together with the adjacent museum, cemetery and Raoul Wallenberg Holocaust Memorial Park which commemorates the Hungarian victims of the Holocaust with a unique sculpture reproducing a weeping willow tree in steel.

Szimpla Kert Ruin Bar - Ruin bars have become rather synonymous with Budapest and are mainly located in Budapest’s old Jewish quarter. This neighbourhood was left to dilapidate after World War II until an underground bar scene developed in the ruins of abandoned buildings. Szimpla Kert Ruin Bar was one of the first and today it's a huge pub with old mismatched items serving as decor all over the place and plenty of good food, drinks and music.

Andrassy Avenue – This 2.5km long avenue dates back to 1872 and was recognised as a World Heritage Site in 2002. It is now one of the main shopping streets in Budapest, elegantly lined with trees and fun just to wander along as it leads all the way to Heroes Square.

Heroes' Square - Located a short metro ride from the city centre, Heroes' Square is dominated by the Millenary Monument, with the Tomb of the Unknown Soldier in front. Flanking the square are the Museum of Fine Arts and the Kunsthalle Budapest, and behind it, the City Park opens out, providing access to Vajdahunyad Castle.

Budapest City Park - This is a public park for the citizens of Budapest which includes sports facilities, swimming baths, and even a boating lake which is transformed into one of Europe’s largest ice rinks in winter. The park is also where you will find the Budapest Municipal Zoo and Botanical Gardens. Just outside of the park you can find one of the largest sand timers in the world, The Time Wheel. This modern and colossal hourglass sculpture is designed to record the passage of 1 year with the passing of sand grains and is rotated every New Year.

Palace District – This is both a historic and hip, up-and-coming residential district area with a trendy, creative vibe. The architecture is stunning as many of the old palaces are located in this area. There are also leafy squares full of restaurants and cafes, artsy boutique hotels, independent galleries and of course, the Hungarian National Museum. MÜSZI is a cultural centre with a bar on the roof of a communist-era department store!

The Great Market Hall in Budapest

Central Market Hall – The Great Market Hall in Budapest was built in 1897 and is arguably the most beautiful and largest of all Budapest market halls. It can be very touristy, but it's still a great place to browse fresh goods, do some tourist souvenir shopping or even just enjoy people watching. Don't forget to make your way up to the 3rd level where you can taste some local Hungarian specialities as we did!

Jónás Craft Beer House - This is a great place with a good atmosphere to sit and watch the sunset over the Danube river. We ended our day of exploring the Pest side of Budapest with a delicious burger and beer here and it was the perfect way to end the day.

What To See And Do On The BUDA Side Of Budapest

Ultimate BUDAPEST What To See And Do Guide

FREE Things To See And Do In Budapest

Back to the HUNGARY Travel Guide

See All Posts On HUNGARY