The Best Food Of MALAYSIA

Traditional cuisine in Malaysia is incredibly diverse, mainly due to cultural history. You will find Malay, Chinese, Indian, Indonesian and Bornean with strong influences from Thai, Portuguese, Dutch, Arabian and even British cuisine. This has resulted in a symphony of flavours, making Malaysian cuisine truly complex and diverse.

These are just some of the many Malaysian foods that we tried. After reading this, be sure to also read our Malaysian Sweet Treats post as you might want to start with those!

Although unofficial, nasi lemak is often referred to as Malaysia’s national dish! It’s a simple dish of rice cooked in coconut milk, which is most commonly eaten for breakfast. That being said, you can find nasi lemak at most street-side vendors and the locals are more than happy to enjoy it at any time of day. Depending on where you are in Malaysia, you’ll find it served with a variety of add-ons. This might be hard-boiled eggs, peanuts, vegetables, lamb, chicken, beef, curry, seafood, or even a chilli-based sambal sauce. You simply haven’t been to Malaysia if you haven’t tried at least one nasi lemak!

This somewhat more western-style breakfast of kaya toast is very simple yet delicious. Kaya is a heavenly concoction best described as a coconut custard jam. You can find this all over Malaysia and in addition to being delicious eaten by the spoonful straight out of the jar, kaya is just amazing melted into slices of warm buttered toast. You’ll see locals enjoying this along with soft-boiled eggs seasoned with soy sauce and pepper for breakfast or just as a snack. Also used to fill tasty little kaya balls and served with fresh waffles, kaya is so typically Malaysian and delicious - be sure to give this a try!

This is not so much a single dish as it is a buffet style meal. You start with a pile of rice and then choose from a buffet-style of add-ons such as fish, eggs, curry, cubes of beef, okra, and plenty more. There are so many nasi kandar stalls and restaurants all over Malaysia, you won’t be able to miss them.

Sold by many a street side vendor and yet also available in almost any sit down restaurant, this dish is simple, humble yet satisfying. It consists of yellow noodles, usually with a choice of beef or chicken, thrown together with shrimp, a mixture of vegetables, eggs, and soy sauce. A little bit of chilli is thrown in at the end, giving it a kick of heat without overpowering the dish.

Ayam percik is simply chicken in percik sauce. The uncooked chicken is liberally covered with a sauce made from spicy chilli, garlic, ginger, and coconut milk before it is cooked over an open flame barbecue. You can find this at most night markets.

Many people mistake rendang for curry. The difference is that rendang is a slow-simmered, sweet and savoury mixture of coconut milk, spices and beef, chicken or lamb meat. The slow cooking process allows the meat to absorb all the flavors of the spices and coconut milk. As the liquid evaporates, it leaves behind the succulent, tender and fully-flavoured beef, chicken or lamb. 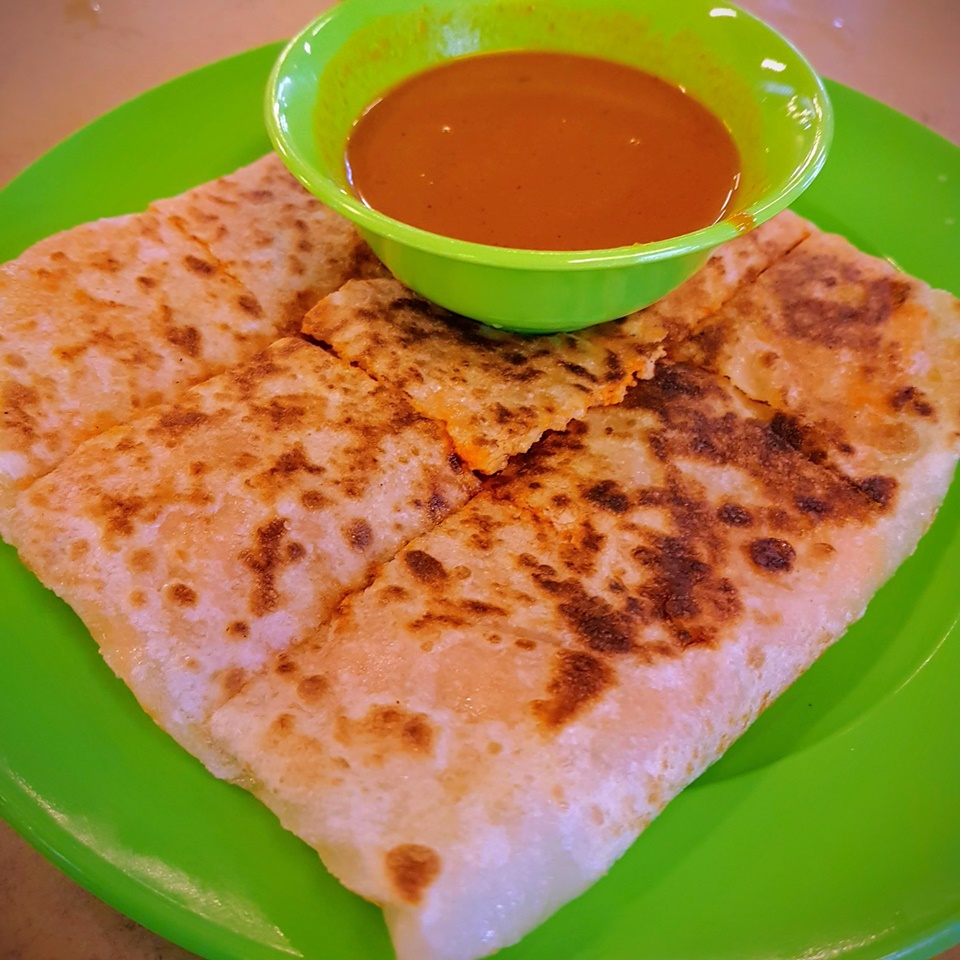 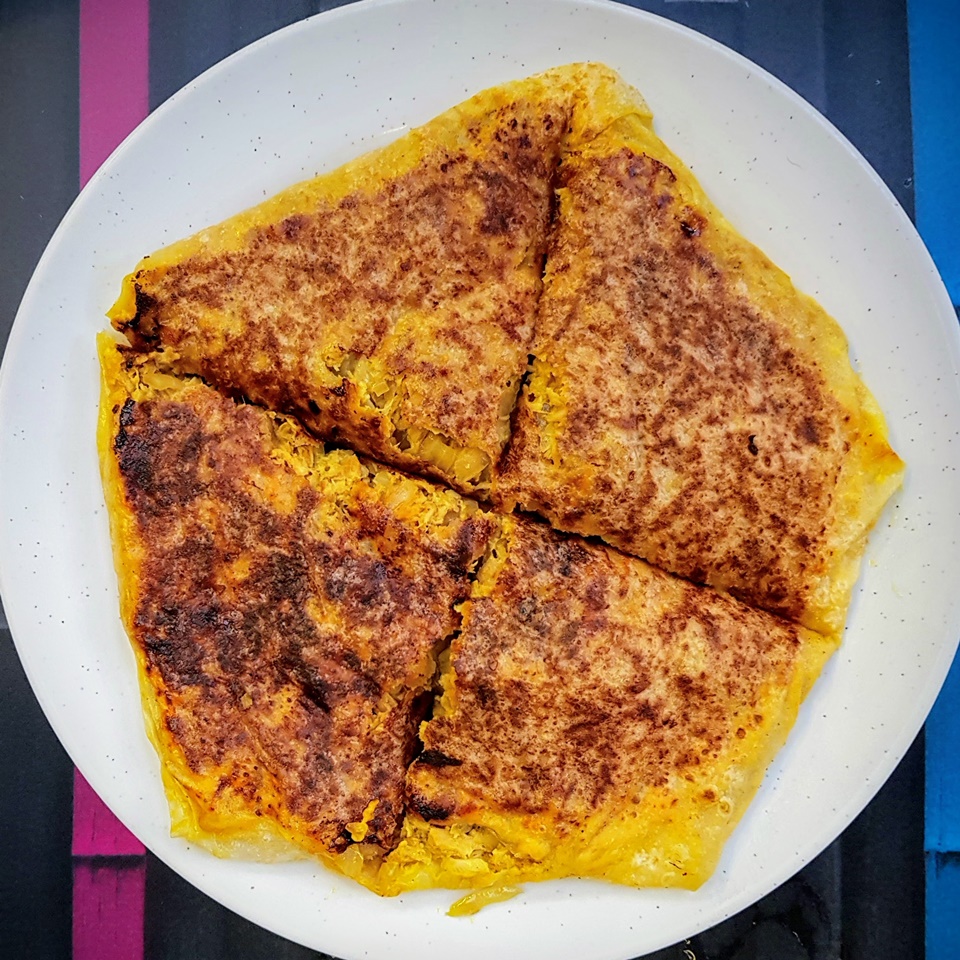 A very thin pancake like dough is packed full of minced meat (either beef, chicken or lamb), garlic, egg, and onion and then fried until crispy. You can find it served with curry or gravy, sliced cucumbers, onions pickled in syrup or tomato sauce. It can be both spicy and sour. Definitely a must-try Malaysian food and also very filling.

This dish of blue rice hails from Kelantan, the northern part of Malaysia. The blue hue of the rice comes from telang flowers which are crushed and mixed into the rice. The dish is served with bean sprouts, fried coconut and some fermented fish sauce, called spicy budu. Not only tasty, but pretty too!

This one is super spicy, so we gave it a skip. But if you like spicy, you’ll have to try laksa. It’s an extremely spicy noodle soup which warns you of exactly that by its bright red colour! It will usually come with fish or prawns. Spicy and fishy - sorry, but not for me!

For an interesting and sublime combination of sweet, sour, and spicy, you must try rojak. This fried dough fritter is typically filled with vegetables and fruits, though it will vary by region. Whatever you find inside though, it comes mixed in that ever-present Malaysian shrimp paste. It might sound bizarre, but it is such a fascinating combination of flavours that you’ll find yourself craving rojak at every turn.

Not a dish in itself, but rather an accompaniment, this is one of my favourites! The flatbread consists of flour, butter and water. The dough is folded and flattened and gets a coating of oil before being cooked up in a skillet. The result is a fluffy and light roti with the perfect crisp outside. It can either be eaten as a snack or used to scoop up curries. 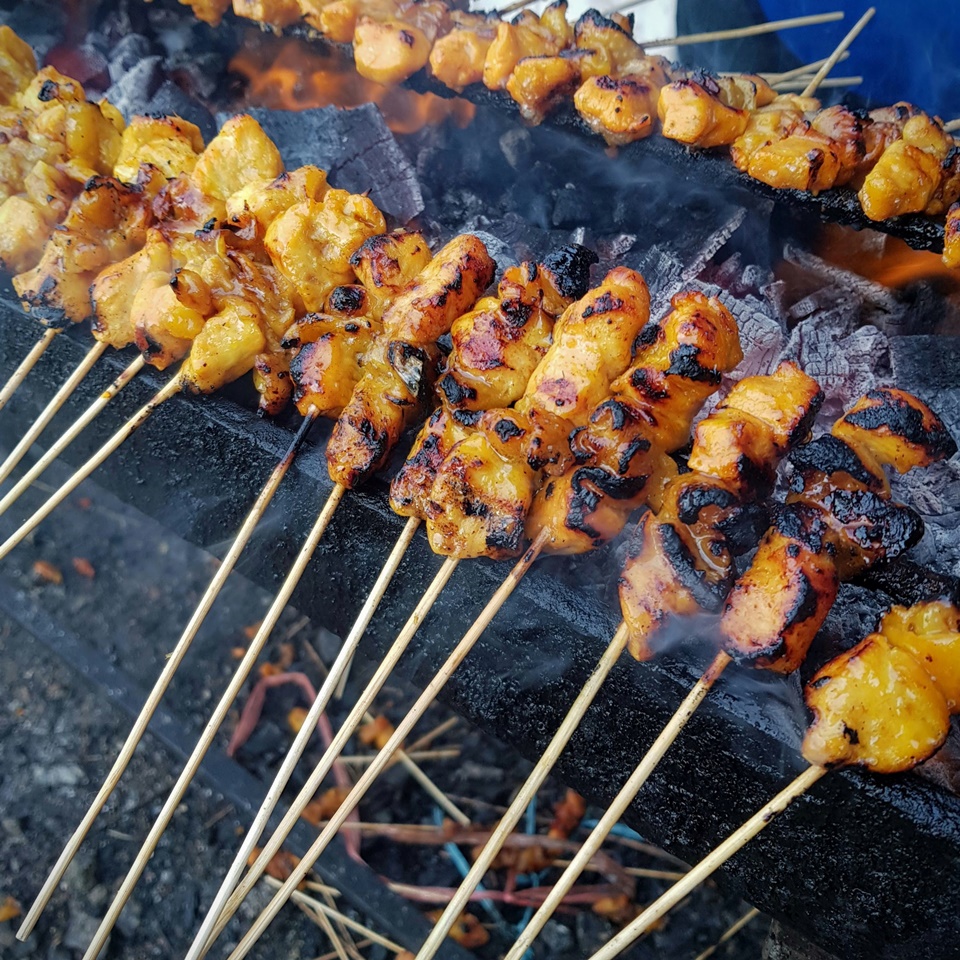 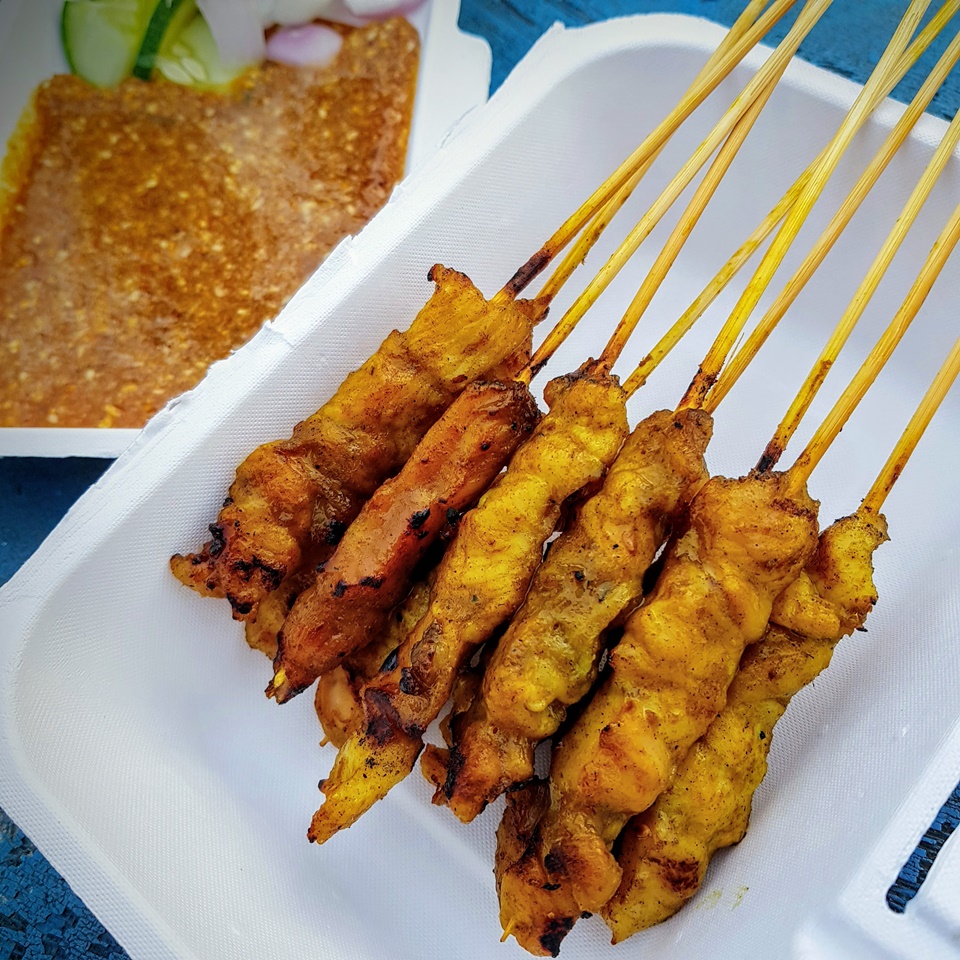 A lot more than just meat on a stick, Malaysian satay is all about the delicious sweet peanut sauce. You’ll find many a street vendor selling chicken and beef satay and it’s a great snack to eat on the run.

Directly translated, ikan bakar means “burned fish.” The fish is grilled over an open flame, making it crispy on the outside and perfectly fleshy on the inside. Usually also marinated in a hot chilli pepper and shrimp paste sambal, this is Malaysia’s version of a seafood barbecue.

These steamed spring rolls are so much tastier than they look! They have a vegetable filling of stewed jicama (similar to turnip), carrots and bean sprouts are rolled in a rice paper wrapper with minced prawns, fried shallots and lettuce. A sweet & hot chilli sauce is served on the side. We found these at both Gurney Drive Hawkers Night Market and at Northam Beach Cafe in Penang. You can also find the deep-fried variety, which we found in Langkawi Night Market, which is like a traditional Chinese spring roll.

Most famous in Penang, but also found all over the rest of Malaysia, Char Koay Teow is one of those dishes you simply have to try. It’s such a staple of the locals that you can find it really cheap on almost any street corner and the best is to taste a few different varieties. It is a dish of flat rice noodles that are traditionally fried up with pork lard. The noodles are then tossed with both dark and light soy sauce, some chilli paste (optional), egg, Chinese chives, bean sprouts and a few shrimps. You will usually have the option of duck egg at a small additional cost, which gives the dish an added richness. What makes this dish so special and fun to see them preparing, is that fact that it is cooked very quickly over extremely high heat in a wok. Different versions include Singapore Char (fishier) and varieties with a very thin noodle as well as a very wide flat noodle. You can see us trying 3 different varieties at Northam Beach Cafe, Penang in this video!

This one-pot rice meal has the most delicious smoky exotic aroma which we found to be the tastiest rice dish in all of Malaysia! We had the Clay Pot Chicken Rice from Gurney Drive Hawkers night Market, Penang, which was also served with a fried egg. The crispy part of the rice at the bottom of the clay pot is so flavourful, as cooking everything together in the clay pot imparts such great flavour to the rice.

In Malaysia, the Chinese style dumplings will usually be filled with either chicken or a variety of seafood fillings ranging from crab meat to prawn and even fish eggs (roe). The ones we tried from the local night market in Langkawi were both brightly coloured and very tasty.

Named after the Indian cooking pot (that looks like a wok) in which it is cooked, Kadai Chicken is a north Indian chicken dish. It is only mildly spicy (if you ask for the mild version of course!) with a rich aroma given by the ginger, onions and tomatoes with which it is cooked. Best enjoyed with a fresh naan bread to soak up all that sauce!

This bright red chicken dish is prepared by first marinating chicken in yoghurt and spices before roasting it in a tandoor, a traditional Indian cylindrical clay oven. The chicken is usually served with some naan bread and one or two accompanying sauces.

This north Indian dish is made by marinating the chicken for several hours in a lemon juice, dahi (yoghurt) and a mixture of Kashmiri red chilli, salt, garam masala and ginger-garlic paste. The chicken is then usually cooked in a tandoor (traditional clay oven), but can also be grilled, roasted, or pan-fried. It is served in a mild curry sauce that includes lots of butter, tomato and onion and is simmered until smooth and much of the water has evaporated. Other spices may include cardamom, cumin, cloves, cinnamon, coriander, pepper, garam masala and fenugreek. Cream or even cashew paste may be used as a thickener and the dish is usually garnished with some fresh cilantro. Best enjoyed with a roti canai!

Hainanese choon piah is a version of a spring roll, but with a thicker crepe-like skin which is deep-fried until golden brown and crispy on the outside and warm and slightly chewy inside. The filling is made up of cabbage, jicama, carrots, onions, shrimps and pork or chicken and seasoned with five-spice powder. The filling is stir-fried together before it is wrapped into thick rolls using the crepe-like skin. They are usually sliced into bite-size pieces to be served with a dipping sauce. We really liked this vegetarian one that we tried at the Long Beach Cafe, Batu Ferringhi, Penang. 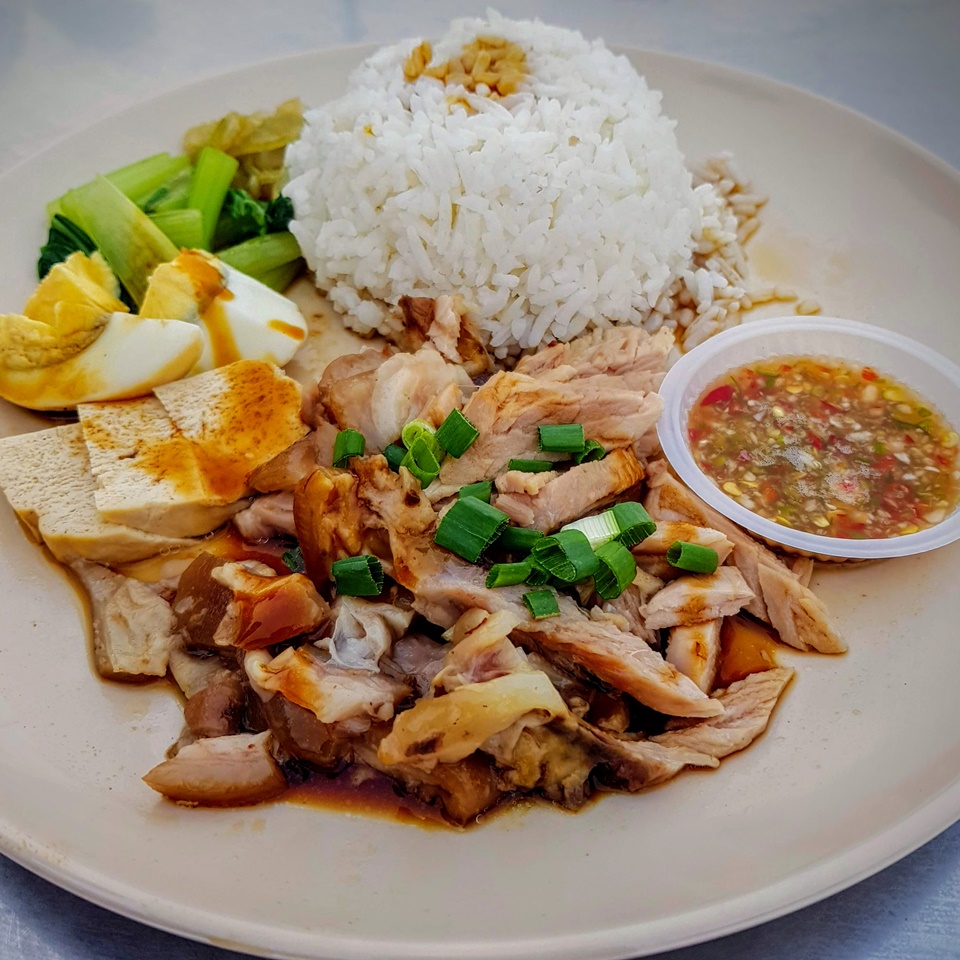 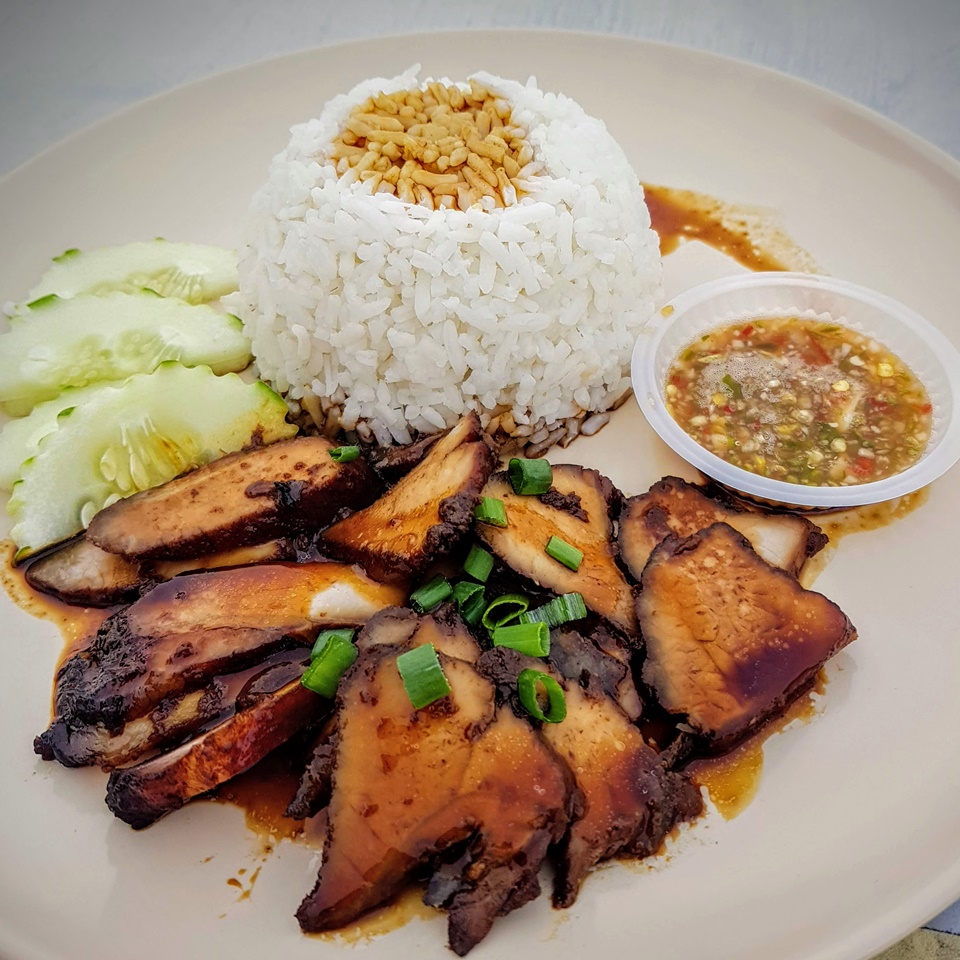 A fairly simple dish, we find that this always sounds and looks better than it actually tastes! It is exactly what it says, a small serving of braised pork meat served with white rice, usually a few cucumber slices and a spicy sauce. Although not terribly exciting, it can still be a convenient go-to dish when you’re not in a very experimenting mood!

This dish consists of poached chicken and seasoned rice, served with chilli sauce and of course the compulsory cucumber garnishes. The chicken will usually still have bones in though, so be sure to watch out for those!

Back to MALAYSIA Travel Guide

See All Posts On MALAYSIA