Kindness of Strangers in DUBAI

Early morning we called Khalifa’s brother (Saeed) to confirm a time to meet. The plan was that he could show us around the newer parts of Dubai some time in the afternoon. It was decided that 3pm would be ideal and we would meet him at the iconic landmark of Jumeirah mosque.

After breakfast we set off towards the Dubai Museum - determined to do some bargain shopping on Computer Street either en-route or on the way back.

This place is just amazing. Where we come from, 2 similar shops wouldn’t dream of opening their doors across from each other. In Dubai though, it’s as if a specific space was set out for certain type of businesses. All the spice shops here, all the clothing shops there, and all the electronic shops here. All nicely spaced together. It does make comparing prices and products very easy indeed.

In our search for an MP3 player we were exhausted within 30 min (after being into at least 5 shops). Oddly you do not find all the same stuff in every shop. Name brand stuff yes, but home brand electronic & computer equipment are also abound.

By pure chance we stumbled into a tiny little corner shop. Selling anything from watches to electronic surveillance cameras. Lisa had her eye on a very specific digital camera that we’ve been asking about over the last few days. Engaging in some frantic bargaining we finally walked away with a new camera (+ extras) as well as an MP3 player. Shopping done!

The Dubai Museum is well worth a visit. Lots of interesting displays and history on Dubai. We were unlucky enough to share the space with a tour group but it was good fun.

From there we made our way back to the hotel and grabbed a taxi to Jumeirah beach.

Firstly, taxi’s in Dubai are expensive. Probably not the most expensive in the world but still quite bad. To be fair, I probably wouldn’t take a taxi in Cape Town without checking my bank balance first either! However, there’s a LOT of taxi’s in Dubai. But there’s also a LOT of tourists.

The thing about Dubai is that they are well geared towards tourism. And they welcome tourists. You can see and feel it everywhere. These people know a good thing and they know how to bring money into their country. There is almost no limit or boundary to what they are capable of. I struck up a conversation with a gentlemen in City Centre (mall), while admiring the model for a new beachfront development. He told me that the success of Dubai (to attract people and their money) is to spend lots of it (money). The best of everything. In one place. Come and get some..

Currently under construction are 2 (amongst dozens of others) rather fascinating projects. The one (called The World) comprises a series of man-made islands in the shape of the earth. Each individual island geographically represents a country on earth. You may then purchase such an island for exclusive use. So if you want to live in Brazil – no problem!

The other project is called Dubai Land. When completed it will comprise approximately the same area as a quarter of the city itself. I assure you - that’s huge! It will include a Jurassic Park area (Dubai style) and also a full size reproduction of the Seven Wonders of the World. Wow indeed.. Now surely this is as good a reason as any to return to Dubai for another visit?

Getting side-tracked here. Back to the taxi ride. The 2.5km drive to Jumeirah Beach was 10 dirham exactly. You decide.

Jumeirah Beach is the only remaining public beach in Dubai. It is rather unfortunate that in the search for exclusivity, most of the beach front properties actually includes the beach itself. Most of the rest of the beach areas belong to member-only resorts and clubs. There is also a rather large stretch belonging to the royal family.

Apart from the fact that Jumeirah beach almost looks a tad artificial with all the date palms and superfine sand, it’s a rather nice place to enjoy the mild autumn sun. Not surprisingly, there weren’t that many people on the beach.

If you do visit Jumeirah beach one day, remember not to run towards the water. Or go for a walk there at night. Most of the times the waves carve a very high (2-3m) cliff out of the beach; an extreme hazard if you’re not very careful. As with everywhere in Dubai, there are also the always present construction. In this case right next to the beach.

We rushed back to Jumeirah mosque to meet Saeed there at 3pm. He wasn’t there yet so we struck up a conversation with the only other tourist looking people around – a middle aged German couple (looking decidedly exhausted) and shared some Dubai experiences. This is the 2nd time we’ve encountered some people who dearly want to visit South Africa, but have heard only horror stories of the high levels of crime.

The Jumeirah mosque is the only mosque in Dubai that allows visitors inside. Unfortunately (we only found this out when we got there), tours are only on Thursday mornings. Which is a real pity. Apparently it is quite an experience and one is free to take photos.

With a lot of locals entering and leaving the mosque, we kept an eye out for Saeed. But alas, he was nowhere to be seen. After 30 minutes we became really worried and decided on plan B. After some contemplation, I approached one of the locals coming out of the mosque asking him if he had a cell phone I could use. It immediately became apparent that he neither speaks nor understands any English. Nevertheless, with the amazing marvel of some grunts and sign language, he produced a cell phone and dialled Saeed’s number. Tiny problem. The phone displays only Arabic characters. After attempting to dial the number a couple of times and keep hearing some sort of message (it was in Arabic so it was hard to tell what exactly it was), the guy looked around and rushed over to a car parked nearby, asking the driver for assistance. Out got a young fellow with pleasant futures. In perfect English (yay!) he offered his help. (Afterwards he told me that he was watching us and actually thought that the other guy was deaf and we were communicating using sign language!).

He introduced himself as Halim , his wife Dilyana and their little daughter Leyla.

He then too called Saeed with no success. Sensing our distress he kept retrying and offered to leave a voice message or send a text message. Now get this! He asked whether we had a cell phone with us as he could give us his SIM card to be able to keep trying to call Saeed. He would then call us later to meet us and collect the SIM again! Amazing or what? They told us that they were actually taking a friend visiting from Egypt around to see some of the sights and promptly offered to take us along. We accepted gratefully. Best case we would have a final opportunity to see more of the new parts of Dubai.

We got into their car and drove with our new friends down Jumeirah road towards the Burh al Arab. Close by is the enormous Jumeirah Beach Hotel and an upmarket mall based on an authentic Arabic market. We stopped there and had a walk around, trying to get as close as possible to the majestic Burj Al Arab. As the tallest hotel in the world (321m) and also the only 7 star hotel, it is not easy to get very near to it. A guarded bridge leads to it with helicopter or boat the only alternative for reaching it. Extremely exclusive but still worth seeing – if only to admire the bold feat of engineering and striking architecture. (A year or so ago Andre Agassi and Roger Federer played an exhibition match on the helicopter landing pad).

We decided to swing by The Mall of The Emirates where a new Ski Park has opened just a couple of weeks before. Just for a quick peek.

Dubai traffic was at it absolute worst and we literally drove around in circles. Our gracious host shared with us an encounter he had in South Africa with some armed robbers / hijackers. (He is a steward with Emirates Airlines and gets around quite a bit). On that topic, he was reminded that he’s supposed to be on a flight in 3 hours (I think it was to Bahrain). The next 30 min we spent navigating gridlocked traffic while contemplating whether he can make it in time (apparently they need to report to the airport 2 hours before take-off).

Eventually a decision was made that it was a pointless exercise and he called in absent. We were then again promptly invited for dinner somewhere in Bur Dubai.

Peculiar place this.. A definite Oriental / Asian influence but somehow some American also comes through. You get a warm hand towel to start and also complimentary soup and bread. The selection and quality of the food is very good but everything good is somehow a tad diminished by the strange choice of paper place-mats and paper drinking cups?! But still well worth a visit.

As if they haven’t done enough for us yet today, Halim slipped away and settled the bill, refusing to accept anything. (Halim, when you come to Cape Town I’m going to take you up on your offer). An interesting bit about our new friends: Even though Halim is Moroccan he now lives in Dubai. He met Dilyana in an Internet chatroom while she stayed in Bulgaria. A year or so later they got married. And even though they have been friends with their Egyptian visitor for a long time, it (up till now) has also only been via the Internet!

After dinner they dropped us off near our hotel at (guess where?), Carrefour for some final farewell shopping! Wish we had one of those back home!

We grabbed a quick shower, packed our bags and were picked up by an Emirates shuttle at midnight. And that was Dubai.

What an amazing place. What amazing people.

We greet it with some sorrow but know that we shall return. 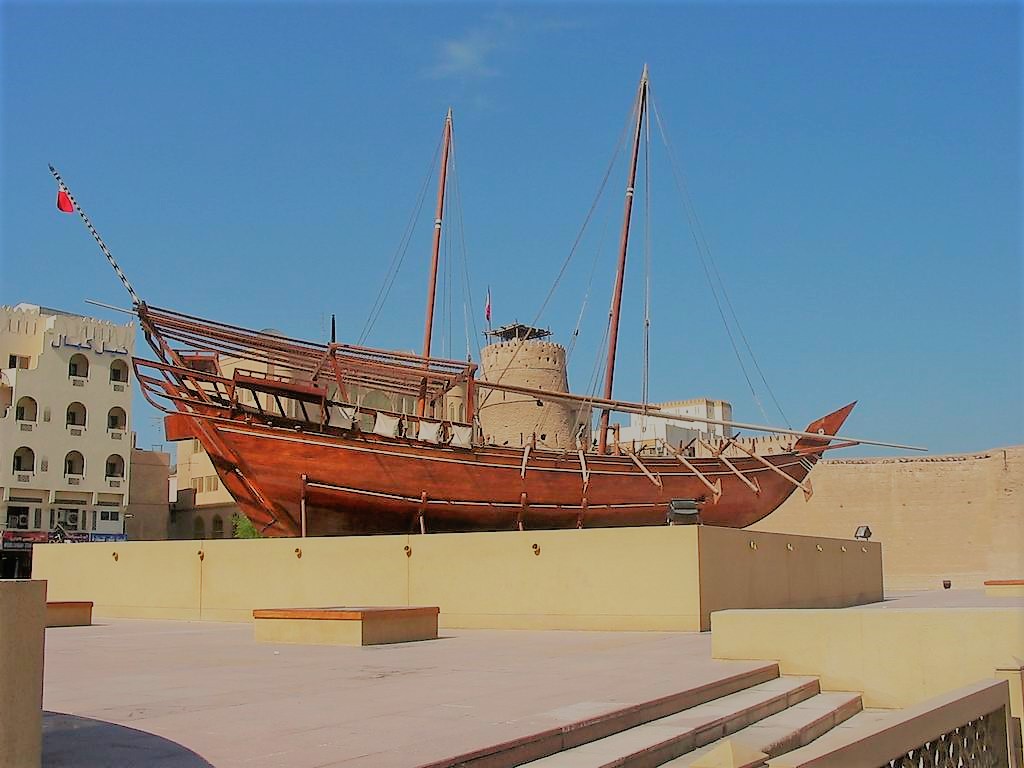 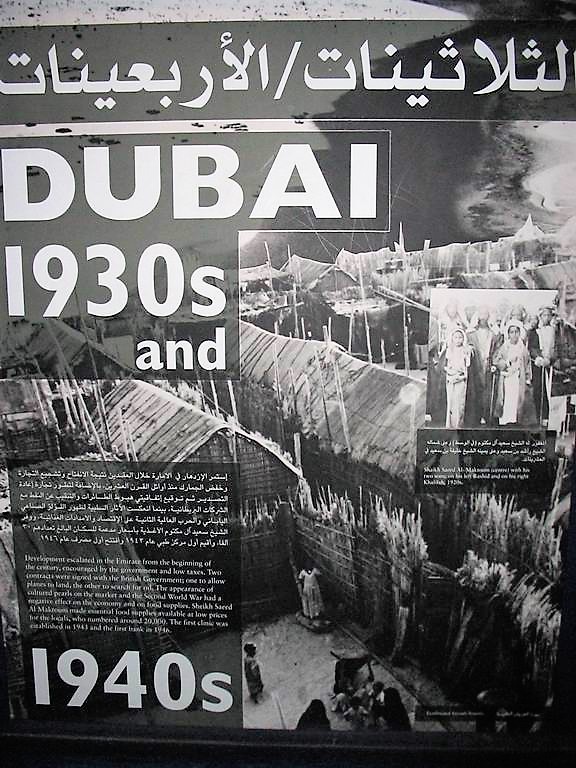 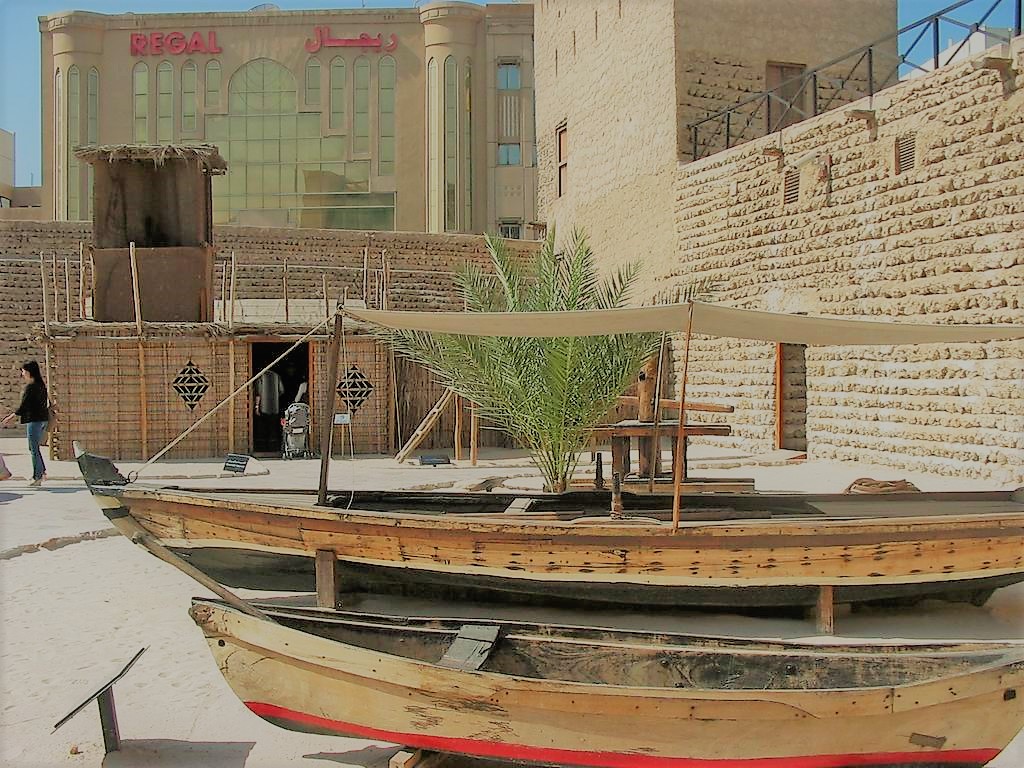 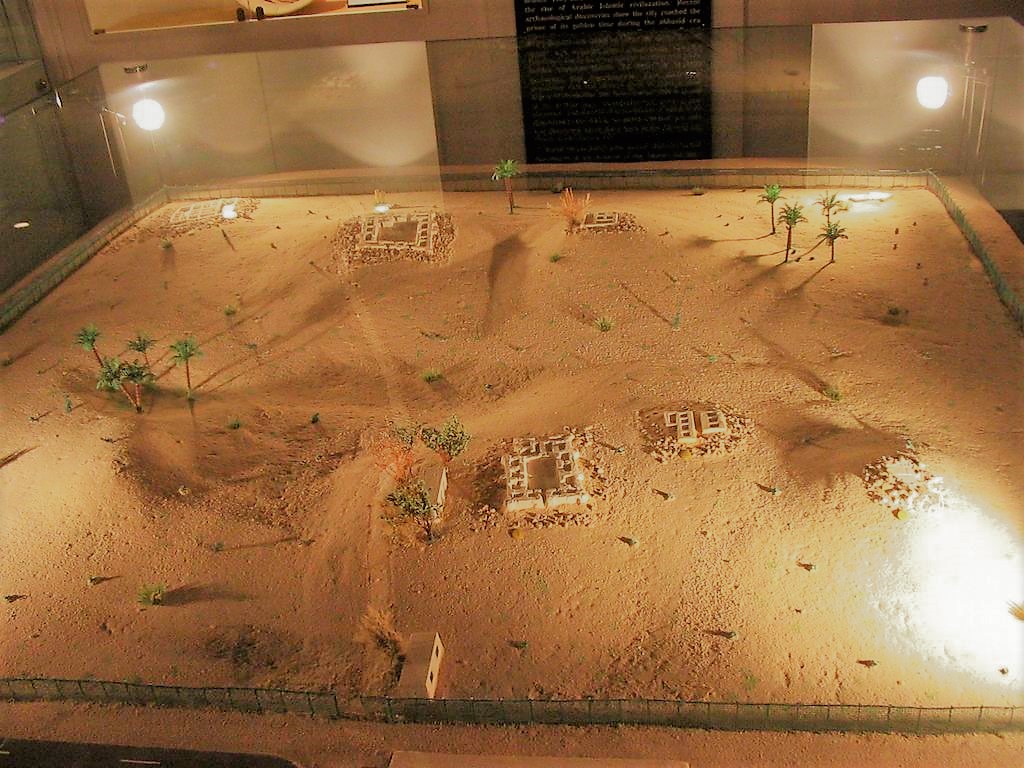 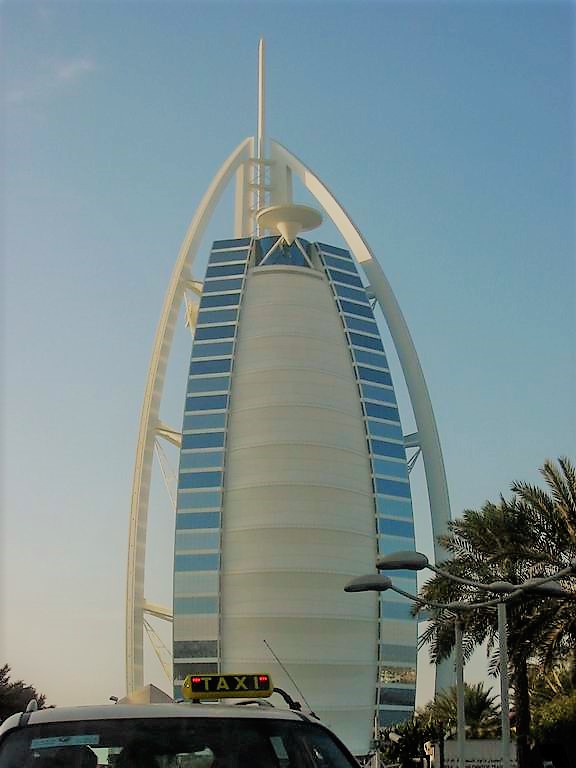 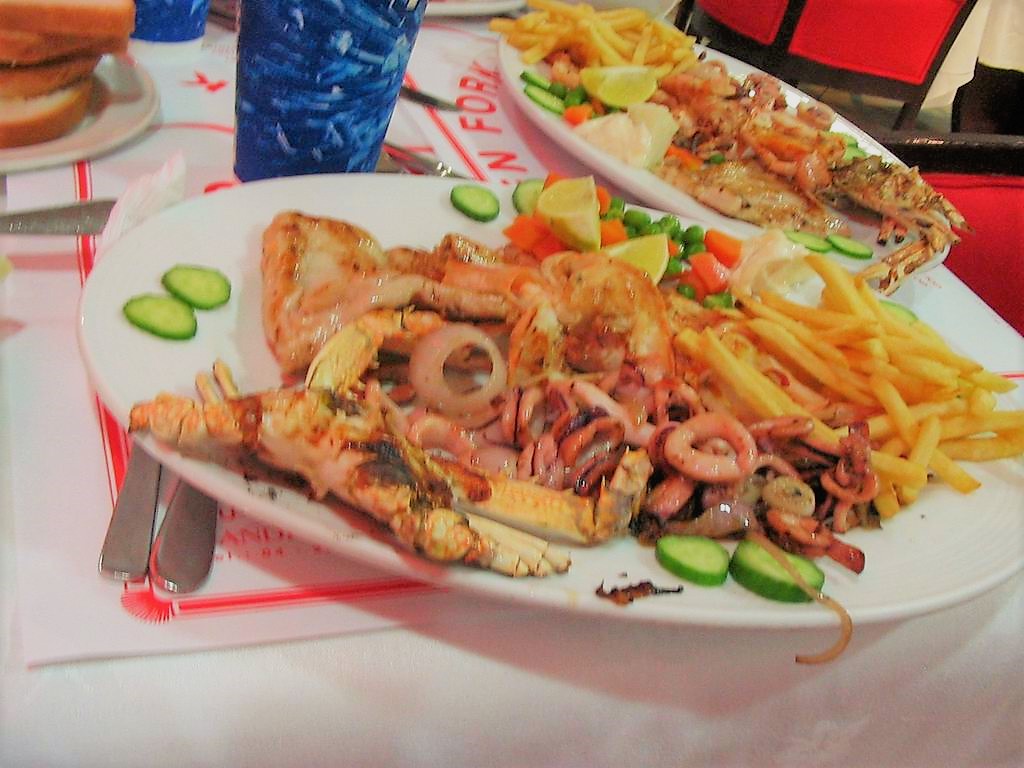